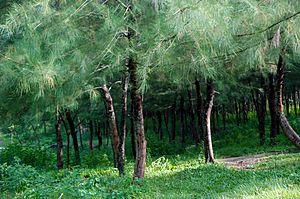 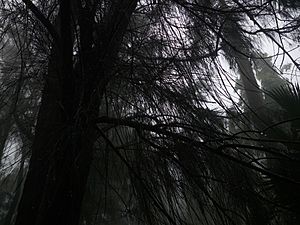 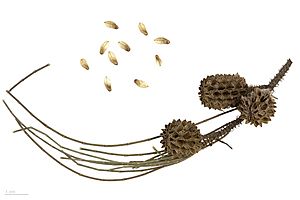 Casuarina equisetifolia, the Australian pine tree or whistling pine tree, is a she-oak species of the genus Casuarina. The native range extends throughout Southeast Asia, Northern Australia and the Pacific Islands; including Thailand, Myanmar, Vietnam, Malaysia, Singapore, Brunei, Indonesia, East Timor, and the Philippines (where it is known as agoho pine), east to Papua New Guinea, French Polynesia, New Caledonia, and Vanuatu, and south to Australia (north of Northern Territory, north and east Queensland, and north-eastern New South Wales). Populations are also found in Madagascar, but it is doubtful if this is within the native range of the species. The species has been introduced to the Southern United States and West Africa. It is an invasive species in Florida, South Africa, India and Brazil. 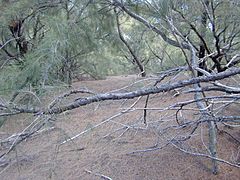 Casuarina equisetifolia leaf litter suppresses germination of understory plants using a biochemical means or allelopathy. This is one reason it can be such a damaging invasive species in places outside its native range.

Like some other species of the genus Casuarina, C. equisetifolia is an actinorhizal plant able to fix atmospheric nitrogen. In contrast to species of the plant family Fabaceae (e.g., beans, alfalfa, Acacia), Casuarina harbours a symbiosis with a Frankia actinomycete.

Casuarina is found from Myanmar and Vietnam throughout Malesia east to French Polynesia, New Caledonia, and Vanuatu, and south into Australia (the northern parts of Northern Territory, north and east Queensland, and northeastern New South Wales, where it extends as far south as Laurieton.

Casuarina is widely used as a bonsai subject, particularly in South-east Asia and parts of the Caribbean. Indonesian specimens and those cultivated in Taiwan are regarded among the best in the bonsai world. The wood of this tree is used for shingles, fencing, and is said to make excellent hot-burning firewood. Among the islands of Hawaii, Casuarina are also grown for erosion prevention, and in general as wind breaking elements.

The legendary miraculous spear Kaumaile came with the hero Tefolaha on the South Pacific island Nanumea. He fought with it on the islands of Samoa and Tonga. As Tefolaha died, "Kaumaile" went to his heirs, then to their heirs, and on and on - 23 generations. It is about 1.80 meters long and about 880 years old and the tree was cut on Samoa.

The Casuarina leaves are usually used for ornamental purposes in the urban region.

Other than ornamental purposes, the Casuarina was also explored in for its potential in remediation of textile dye wastewater. Casuarina leaves were found to be useful as absorbent material for the removal of textile dyes such as reactive orange 16 Rhodamine B, methylene blue, malachite green and methyl violet 2b. Similarly the Casuarina dried cone was also reported to be able to remove Rhodamine B, and methyl violet 2b. The Casuarina bark was reported to able to remove methylene blue. Even the Casuarina seed was also found to be useful in dye removal of neutral red and malachite green. The carbon derived from the cones of Casuarina was found to be good absorbent for the landfill leachate, while another laboratory also reported good absorbent for copper ions from aqueous solution. Casuarina equisetifolia Lin. (Casuarinaceae) has been used traditionally for treating inflammation, cancer and other diseases, but its efficacy has not been scientifically examined in treating arthritis; the bark extract showed anti-arthritic activity. Methanolic extract of Casuarina equisetifolia fruit contain significant percentage of secondary metabolite like poly phenol, it showed antioxidant and anti-arthritic activity. Methanolic extract of Casuarina equisetifolia Lin. Leaf against Ehrlich Ascites Carcinoma Induced Cancer in Mice; possess protective action on the hemopoietic system.

All content from Kiddle encyclopedia articles (including the article images and facts) can be freely used under Attribution-ShareAlike license, unless stated otherwise. Cite this article:
Casuarina equisetifolia Facts for Kids. Kiddle Encyclopedia.