Chandler's Ford (originally The Ford and historically Chandlersford) is a largely residential area and civil parish in the Borough of Eastleigh in Hampshire, England. It has a population of 21,436 in the 2011 UK Census.

Chandler's Ford lies on the old Winchester to Southampton road and the 'Ford' is thought to refer either to the ford of Monks Brook on the Hursley Road (shown on the Hursley map of 1588 as "Charnells foord") or on the Winchester-Southampton road. The "Chandler's" prefix was possibly added in the late 16th century, although there are numerous theories for the origin of the word. 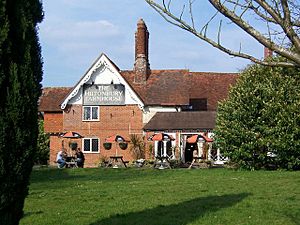 Hiltonbury Farm (now a public house) appeared on a map of 1588 and may originally have been owned by the Hursley Park Estate in nearby Hursley. It was later sold to Cranbury Park Estate and stopped being a working farm in the late 1970s, when the surrounding area was developed. Other communities revolved around other farms in the area but Chandler's Ford was very sparsely populated until the 19th century.

In 1889, an iron church and some schools were constructed. The civil parish of Chandlersford was created in 1897, from portions of North Stoneham, North Baddesley, and Ampfield, although the railway station remained in the North Baddesley parish.

Chandler's Ford used to be a town with mainly housing estates, however there are now various developments of shops and schools that have been built in the area. In the 1920s, building took place in the King's Court, Merdon and Hiltingbury areas. Later, development in the Hursley Road area happened, followed by housing across the Hiltingbury, Scantabout, Peverells Road, Spring Hill and Oakmount areas. More recently, developments in North Millers Dale, South Millers Dale and the 'new town' of Valley Park to the West of Chandler's Ford have completed the mix of housing. Chandler's Ford is considered to be the development to the West of the M3 motorway and now forms the majority of the Eastleigh urban area.

Due to the development of the town, there is little identifiable 'town centre'. The main commercial centre is in Fryern, the area of the Halfway Inn (near the old tollhouse for Winchester-Southampton), but other smaller shopping areas include the Central Precinct and the area around St Boniface Church (built 1904). An Anglican church was added in Hiltingbury in the 1960s, with the Roman Catholic Church of St. Edward the Confessor and Methodist churches existing on the main Winchester-Southampton route.

Although a mainly residential area, Chandler's Ford has a significant industrial estate located mainly off School Lane and in between the B3043 – Bournemouth Road. The companies on the industrial estate now cover a wide variety of industries from light engineering and manufacturing, distribution, retail and outsourcing. A number of employers on the estate are of particular local interest. Peter Green Furnishers were once regarded as the biggest furniture and carpeting store in the whole of Hampshire. Selwoods is also another company of interest having been in the area since 1946 and with its head office on the corner of School Lane.

Chandler's Ford railway station was re-opened in May 2003, having been closed since 1969. It now has an hourly service run by South West Trains, from Romsey to Salisbury via Chandler's Ford, Eastleigh and Southampton stopping at all stations in between.

An allegedly 'haunted' phone box once stood opposite the Hendy Ford car showroom. This was featured in the DVD "Haunted Hampshire", with noted historian Richard Felix. The phone box has since been removed following a number of reported cases of the phone constantly ringing and those responding to the calls finding themselves hearing silence on the other end.

As of April 2011, the Chandler's Ford and Hiltingbury council wards (which form a continuous built-up area, and make up the main part of what is referred to as "Chandler's Ford") had a population of 21,436, across 8,896 households. The ethnicity of the population was mainly white, with 310 mixed race people, 937 Asian or Asian British people, 100 Black or Black British people and 224 in other ethnic groups. In 2001, 13,531 of the population were Christians, 5,528 professed no religion, and 1,477 did not state their religious beliefs. There were 59 Buddhists, 205 Hindus, 29 Jews, 263 Muslims, 289 Sikhs and 55 people of other religions living in the ward. 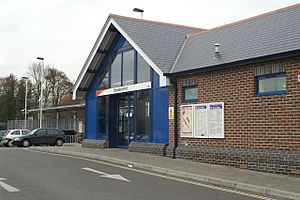 Chandler's Ford is served by Chandler's Ford railway station. The station was reopened for passenger traffic on 18 May 2003. There are links between Romsey and Salisbury via Southampton.

The M3 runs past the eastern border of Chandler's Ford with access from junction 12 from the north and junction 13 from the south.

All content from Kiddle encyclopedia articles (including the article images and facts) can be freely used under Attribution-ShareAlike license, unless stated otherwise. Cite this article:
Chandler's Ford Facts for Kids. Kiddle Encyclopedia.