There are seven types of sea turtles: Kemp's Ridley, Flatback, Green, Olive Ridley, Loggerhead, Hawksbill and the leatherback. All but the leatherback are in the family Chelonioidea. The leatherback belongs to the family Dermochelyidae and is its only member. The leatherback sea turtle is the largest, measuring six or seven feet (2 m) in length at maturity, and three to five feet (1 to 1.5 m) in width, weighing up to 2000 pounds (about 900 kg). Most other species are smaller, being two to four feet in length (0.5 to 1 m) and proportionally less wide. The Flatback turtle is found solely on the northern coast of Australia.

Importantly, for each of the seven types of sea turtles, females and males are the same size, i.e. there is no sexual dimorphism.

In general, sea turtles have a more fusiform body plan than their terrestrial or freshwater counterparts. This tapering at both ends reduces volume and means that sea turtles can't, as can other turtles and tortoises, retract their head and limbs into their shells for protection. But the streamlined body plan reduces friction and drag in the water and allows sea turtles to swim more easily and swiftly.

Sea turtles are generally found in the waters over continental shelves. During the first three to five years of life, sea turtles spend most of their time in the pelagic zone floating in seaweed mats. Green sea turtles in particular are often found in Sargassum mats, in which they find shelter food,and water. Once the sea turtle has reached adulthood it moves closer to the shore. Females will come ashore to lay their eggs on sandy beaches during the nesting season.

Sea turtles migrate to reach their spawning beaches, which are limited in numbers. Living in the ocean therefore means they usually migrate over large distances. All sea turtles have large body sizes, which is helpful for moving large distances. Large body sizes also offer good protection against the large predators (notably sharks) found in the ocean. 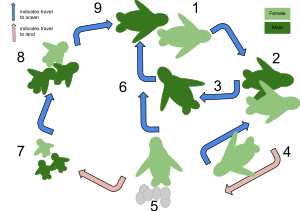 It takes decades for sea turtles to reach sexual maturity. Mature sea turtles may migrate thousands of miles to reach breeding sites. After mating at sea, adult female sea turtles return to land to lay their eggs. Different species of sea turtles exhibit various levels of philopatry. In the extreme case, females return to the same beach where they hatched. This can take place every two to four years in maturity. 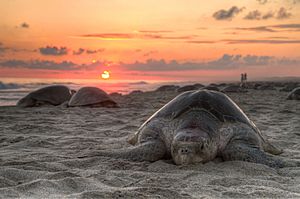 The mature nesting female hauls herself onto the beach, nearly always at night, and finds suitable sand in which to create a nest. Using her hind flippers, she digs a circular hole 40 to 50 centimetres (16 to 20 in) deep. After the hole is dug, the female then starts filling the nest with her clutch of soft-shelled eggs. Depending on the species, a typical clutch may contain 50–350 eggs. After laying, she re-fills the nest with sand, re-sculpting and smoothing the surface, and then camouflaging the nest with vegetation until it is relatively undetectable visually. The whole process takes 30 to 60 minutes. She then returns to the ocean, leaving the eggs untended.

Females may lay 1–8 clutches in a single season. Female sea turtles alternate between mating in the water and laying their eggs on land. Most sea turtle species nest individually. But ridley sea turtles come ashore en masse, known as an arribada (arrival). With the Kemp's ridley sea turtle this occurs during the day.

Sea turtles have temperature-dependent sex determination, meaning the developing baby sea turtle's sex depends on the temperature it is exposed to. Warmer temperatures produce female hatchlings, while cooler temperatures produce male hatchlings. The eggs will incubate for 50–60 days. The eggs in one nest hatch together over a short period of time. The baby sea turtles break free of the egg shell, dig through the sand, and crawl into the sea. Most species of sea turtles hatch at night. However, the Kemp's ridley sea turtle commonly hatches during the day. Sea turtle nests that hatch during the day are more vulnerable to predators, and may encounter more human activity on the beach. 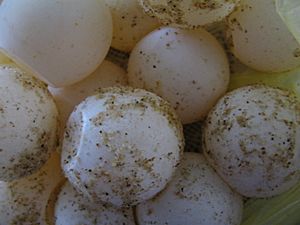 Sea turtle gender depends on sand temperature while the egg is incubating.

Larger hatchlings have a higher probability of survival than smaller individuals, which can be explained by the fact that larger offspring are faster and thus less exposed to predation. Predators can only functionally intake so much; larger individuals are not targeted as often. A study conducted on this topic shows that body size is positively correlated with speed, so larger baby sea turtles are exposed to predators for a shorter amount of time. The fact that there is size dependent predation on chelonians has led to the evolutionary development of large body sizes.

In 1987, Carr discovered that the young of green and loggerhead sea turtles spent a great deal of their pelagic lives in floating sargassum mats. Within these mats, they found ample shelter and food. In the absence of sargassum, young sea turtles feed in the vicinity of upwelling "fronts". In 2007, Reich determined that green sea turtle hatchlings spend the first three to five years of their lives in pelagic waters. In the open ocean, pre-juveniles of this particular species were found to feed on zooplankton and smaller nekton before they are recruited into inshore seagrass meadows as obligate herbivores.

All content from Kiddle encyclopedia articles (including the article images and facts) can be freely used under Attribution-ShareAlike license, unless stated otherwise. Cite this article:
Sea turtle Facts for Kids. Kiddle Encyclopedia.