Chemung is a town in Chemung County, New York, United States. The population was 2,563 at the 2010 census. The town name is derived from the Chemung River, which means "Big Horn" in the native language.

The town is in the southeast corner of the county and is southeast of Elmira. It is part of the Elmira Metropolitan Statistical Area.

The region was destroyed by the Sullivan Expedition on August 13, 1779, which fought at the Battle of Newtown, just west of the current town of Chemung.

The first clear record of settlement dates to about 1786.

The town of Chemung was established in 1788 as the original town in the region. Chemung lost territory when Tioga County was formed in 1791. The town of Newtown (now the town of Elmira) was taken from Chemung in 1792. Chemung was incorporated in 1798 into Montgomery County, at the time of that county's formation. (Chemung County was not created until 1836.) Subsequently, the town of Chemung lost more territory to form all or parts of Erin (1822), Baldwin (1856), and Ashland (1867).

The Chemung District School No. 10, Dr. Hovey Everett House, and Riverside Cemetery are listed on the National Register of Historic Places.

The south border of the town is Pennsylvania (Bradford County), and the east border is Tioga County, New York. 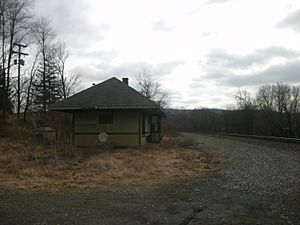 There were 969 households, out of which 36.9% had children under the age of 18 living with them, 64.2% were married couples living together, 7.2% had a female householder with no husband present, and 22.7% were non-families. 17.2% of all households were made up of individuals, and 7.6% had someone living alone who was 65 years of age or older. The average household size was 2.71 and the average family size was 3.03.

Communities and location in Chemung

All content from Kiddle encyclopedia articles (including the article images and facts) can be freely used under Attribution-ShareAlike license, unless stated otherwise. Cite this article:
Chemung, New York Facts for Kids. Kiddle Encyclopedia.