Cherry Creek is a town in Chautauqua County, New York, United States. The population was 1,118 at the 2010 census. The name is derived from that of a small stream that flows through the town amid many cherry trees.

Cherry Creek is situated on the east border of the county, northeast of Jamestown. There is also a village named Cherry Creek located within the town.

The community was first settled around 1815, and the town of Cherry Creek was formed in 1829 from part of the town of Ellington. The settlement got its name from a cherry tree planted by Holland Land Company surveyor Joshua Bentley to mark the center of the new town. The village, which was incorporated in 1893, voted on February 2, 2017 to dissolve into the surrounding town.

New York State Route 83 is a major north-south highway in the eastern half of the town. Chautauqua County Route 70 (the westernmost part of Leon Road) enters the town from the east. The New York and Lake Erie Railroad serves the town with freight and occasional passenger rail service; Chautauqua CARTS serves the town on its Sinclairville-to-Frewsburg line.

Cherry Creek is also the name of a stream that flows into Conewango Creek in the eastern part of the town.

There were 413 households out of which 38.0% had children under the age of 18 living with them, 57.1% were married couples living together, 10.9% had a female householder with no husband present, and 23.5% were non-families. 18.4% of all households were made up of individuals and 6.8% had someone living alone who was 65 years of age or older. The average household size was 2.77 and the average family size was 3.12. 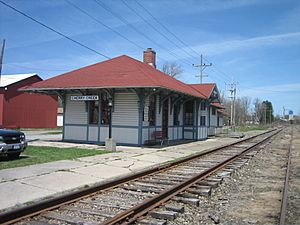 Cherry Creek station for the Buffalo and South Western Railroad

All content from Kiddle encyclopedia articles (including the article images and facts) can be freely used under Attribution-ShareAlike license, unless stated otherwise. Cite this article:
Cherry Creek, New York Facts for Kids. Kiddle Encyclopedia.