Cholula Hot Sauce is a brand of chili-based hot sauce, based in Stamford, Connecticut, manufactured in Chapala, Jalisco, Mexico, and licensed by José Cuervo. According to its manufacturers, Cholula hot sauce rates 1,000-2,000 on the Scoville scale though other sources measure it as being over three times as hot, at 3,600 Scoville units. The product is packaged in a glass bottle with a distinctive round wooden cap. Six varieties of Cholula are widely marketed in North America.

The hot sauce is named after the 2,500-year-old city of Cholula, Puebla, the oldest still-inhabited city in Mexico. The name "Cholula" is derived from the Nahuatl toponym Chollollan, meaning "the place of the retreat.”

Cholula is licensed by Jose Cuervo, but was founded by the Harrison family, originally of Chapala, Jalisco. Prior to its acquisition, Cholula was produced for three generations in Chapala, used primarily as an ingredient in sangrita. Following expansion across the Mexican market, Cholula was first introduced to the United States in Austin, Texas in 1989. During the 1990s, Cholula achieved distribution in supermarket chains throughout the American Southwest; it is currently available nationwide, as well as in many Canadian and British supermarkets.

Cholula has attempted a number of brand extensions. In 1999, a Cholula picante sauce was tested in Denver, Colorado and quickly removed from the market. Cholula's line of dry seasonings, including Original, Chili Lime and Chili Roast Garlic, was discontinued in 2009.

In October 2019, The Cholula Food Company announced they would be moving their headquarters from New York City to Stamford, Connecticut.

The sale of the brand from L Catterton to McCormick & Company was announced on November 24, 2020 and completed six days later on November 30.

Six varieties of Cholula are widely marketed in North America, including Original, Chipotle, Chili Garlic, Chili Lime, Green Pepper, and Sweet Habanero. The product is most frequently retailed in 5-ounce glass bottles, although the original flavor is also available in 2-ounce and 12-ounce glass bottles, as well as 64-ounce plastic bottle, and 7-gram single-use condiment packets.

Cholula is marketed in the United States as The Flavorful Fire, sponsoring a variety of professional sporting venues and competitions. Cholula is served as the "Official Hot Sauce" in concessions at motorsports events including the Toyota Grand Prix of Long Beach and Coca-Cola 600, as well as at all events held at the iconic Indianapolis Motor Speedway. Cholula has sponsored collegiate football and tailgating promotions at the Rose Bowl, Sun Devil Stadium and Huskies Stadium. The brand is also well established as a wintersports sponsor, partnering with snowboarding competitions including the Cholula Triple Air Show. 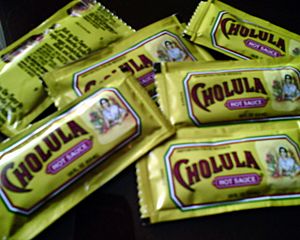 On The Franchise, Brian Wilson, relief pitcher for the Los Angeles Dodgers, named Cholula as one of the best hot sauces on the market.

In 2018, Cholula launched a new advertising campaign under the slogan, "More than a hot sauce, inspiring your own mashups." Heavily promoted on YouTube, the promotion encourages buyers to blend Cholula with everyday condiments.

In response to the COVID-19 pandemic, when restaurants closed, the company released a 2-US-fluid-ounce (60 ml) bottle to boost sales. They also formed a deal with big fast-food chains for branded menu items.

All content from Kiddle encyclopedia articles (including the article images and facts) can be freely used under Attribution-ShareAlike license, unless stated otherwise. Cite this article:
Cholula Hot Sauce Facts for Kids. Kiddle Encyclopedia.