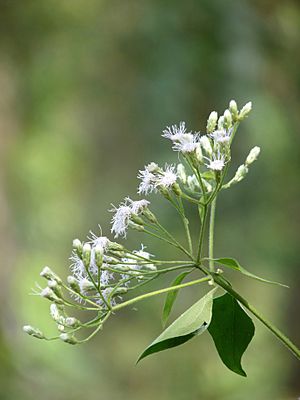 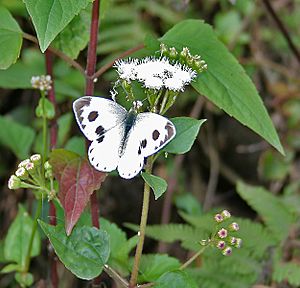 Chromolaena odorata is a tropical and subtropical species of flowering shrub in the sunflower family. It is native to the Americas, from Florida and Texas in the United States south through Mexico and the Caribbean to South America. It has been introduced to tropical Asia, West Africa, and parts of Australia.

Chromolaena odorata is a rapidly growing perennial herb. It is a multi-stemmed shrub to 2.5 m (100 inches) tall in open areas. It has soft stems but the base of the shrub is woody. In shady areas it becomes etiolated and behaves as a creeper, growing on other vegetation. It can then become up to 10 m (33 feet) tall. The plant is hairy and glandular and the leaves give off a pungent, aromatic odour when crushed. The leaves are opposite, triangular to elliptical with serrated edges. Leaves are 4–10 cm long by 1–5 cm wide (up to 4 x 2 inches). Leaf petioles are 1–4 cm long. The white to pale pink tubular flowers are in panicles of 10 to 35 flowers that form at the ends of branches. The seeds are achenes and are somewhat hairy. They are mostly spread by the wind, but can also cling to fur, clothes and machinery, enabling long distance dispersal. Seed production is about 80000 to 90000 per plant. Seeds need light to germinate. The plant can regenerate from the roots. In favorable conditions the plant can grow more than 3 cm per day.

It was earlier taxonomically classified under the genus Eupatorium, but is now considered more closely related to other genera in the tribe Eupatorieae. 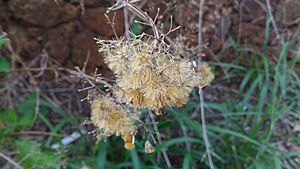 Seeds ready to be dispersed.

A recent review indicates that the ethno-pharmacological, fungicidal, nematicidal importance of the plant and its use as a fallow species and as a soil fertility improvement plant in the slash and burn rotation system of agriculture has contributed to its continued use and spread in Nigeria. 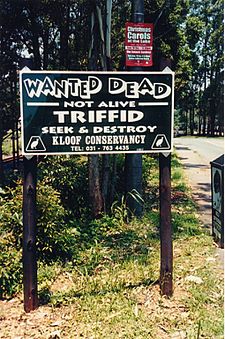 A sign in Kloof encouraging the elimination of Chromolaena odorata, colloquially known as Triffids

Chromolaena odorata is considered an invasive weed of field crops and natural environments in its introduced range. It has been reported to be the most problematic invasive species within protected rainforests in Africa. In Western Africa it prevents regeneration of tree species in areas of shifting cultivation. It affects species diversity in southern Africa. The plant's flammability affects forest edges.

In Sri Lanka it is a major weed in disturbed areas and coconut plantations.

Biological control with a defoliating artiid was attempted in the 1970s.

A renewed call for coordinated biological control effort in Nigeria was made in 2014, to attempt to bring the plant back into an ecological equilibrium.

In Australia a systematic eradication programme with herbicide has been initiated.

The gall forming tephritid fly Cecidochares connexa was introduced into Guam from Indonesia in 1998 and is widespread across the island. Galls form around the fly larvae and become a nutrient sink that diverts energy away from plant growth to provide nutritive tissue along the walls of the larval chamber. Between 1 and 7 larvae can be found in each gall.

In the nineteenth century Chromolaena odorata escaped from the botanical gardens at Dacca (India), Java (Indonesia) and Peradeniya (Sri Lanka). In Western Africa the plant was accidentally introduced with forestry seeds. It was introduced as an ornamental in Southern Africa, and was introduced to Ivory Coast in 1952 to control Imperata grasses. It was first found in Queensland, Australia in 1994 and was perhaps introduced with foreign pasture seeds. It is locally called Communist Pacha in the southern Indian state of Kerala as the plant was introduced there in the 1950s, the era when the communists formed a government.

Chromolaena odorata contains carcinogenic pyrrolizidine alkaloids. It is toxic to cattle. It can also cause allergic reactions. Recent research has shown the plant is larvicidal against all major mosquito vectors.

All content from Kiddle encyclopedia articles (including the article images and facts) can be freely used under Attribution-ShareAlike license, unless stated otherwise. Cite this article:
Chromolaena odorata Facts for Kids. Kiddle Encyclopedia.