Kids Encyclopedia Facts
Not to be confused with Industry City.

The City of Industry is a city in the San Gabriel Valley, in eastern Los Angeles County, California, United States. As suggested by its name, the city is almost entirely industrial—while it contains over 3,000 businesses employing 67,000 people, the 2010 census recorded its resident population at 219, making it the second smallest city in California by population. It was incorporated on June 18, 1957, and has become the economic hub for the San Gabriel Valley.

Industry is a suburb of Los Angeles 22 miles (35 km) away from Downtown L.A.

According to the 2010 United States Census, the City of Industry had a median household income of $49,329, with 1.0% of the population living below the federal poverty line.

The Workman and Temple Family Homestead Museum is located in the City of Industry. It is a Historic house and gardens museum of 19th century and early 20th century Southern California history and architecture, and of the generations of the Workman-Temple family that were influential here and in the region. The property is entered on the National Register of Historic Places.

Industry is the home of the Puente Hills Mall, a major shopping center that was the "Twin/Lone Pine(s) Mall" in the Back to the Future movie series. Adjacent to the mall's property is a SpeedZone entertainment center, which was featured in a prominent scene of Kevin Smith's Clerks II. A former IKEA store located north of the Puente Hills Mall and across the State Route 60 freeway was used as a shooting location for the final fight scene in Mr. & Mrs Smith. Its exterior was renovated so it could be used for both exterior and interior filming; it was later demolished.

Industry also features a McDonald's restaurant that is used strictly for filming movies and commercials. Also in Industry is Vineland Drive-In, one of only two operating drive-in theaters in Los Angeles and Orange County. The city-owned Industry Hills Expo Center is also used for filming.

View of the City of Industry

The city's zoning is primarily devoted to business: 92% is industrial, 8% is commercial. The few residences in the city either existed before incorporation, are on properties adjacent to either Industry Hills Golf Club, Industry Hills Recreation Center or in the small neighborhood adjacent to City Hall. In addition, there are residents at the El Encanto Healthcare Center, a nursing home owned by the city.

The City of Industry has no business taxes and is primarily funded through retail sales tax from shopping centers located within the city limits, and property tax on parcels within the city. The city has the highest property tax rate in Los Angeles County, at 1.92%. In addition, there is a revenue-generating hillside hotel resort, known as the Pacific Palms Resort (formerly the Industry Hills Sheraton), which is almost completely surrounded by the city of La Puente but actually located in the City of Industry.

City of Industry is a popular investment area for Chinese businesspeople and the city has also emerged as a high-tech import/export center for computer parts, with business links to the Asian marketplace. For convenience many Chinese entrepreneurs and staff live in nearby Rowland Heights, Hacienda Heights, West Covina, Diamond Bar and Walnut. 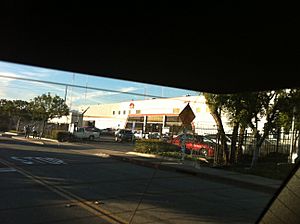 Some of the companies with headquarters in the City of Industry are:

Other businesses with a major presence in the City of Industry include:

The city is served by multiple school districts:

Bishop Amat Memorial High School in La Puente, of the Roman Catholic Archdiocese of Los Angeles, is in proximity to Industry.

All content from Kiddle encyclopedia articles (including the article images and facts) can be freely used under Attribution-ShareAlike license, unless stated otherwise. Cite this article:
City of Industry, California Facts for Kids. Kiddle Encyclopedia.