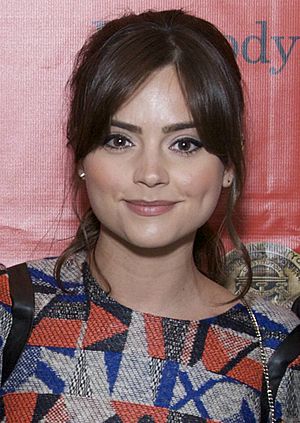 Clara Oswald is a fictional character on the British science fiction television series Doctor Who. She is portrayed by Jenna-Louise Coleman. She first appeared in the show's seventh series. Clara is a companion of the eleventh version of alien time traveller the Doctor (portrayed by Matt Smith).

During 2012 and 2013, the character is introduced as three different people with the same name. Each was played by the same actress. The first two incarnations die during the episode they appear in. The third becomes the Doctor's companion. While each one is different, the characters are meant to be seen as the same person. This sets up a mystery to be solved. Coleman took over as the show's female lead in the mid-series Christmas special. At that time, she was portraying Victorian governess and barmaid Clara Oswin Oswald. At the end of that episode, Coleman is seen playing a third version of the character. This character was from modern day London and was named Clara Oswald. Starting in the following episode, Clara Oswald travels as the Doctor's full-time companion. During her third introduction, she gives herself the nickname Oswin. It is a mixture of Oswald and win.

Coleman has said that she will be in the eighth series. It is to begin filming in September 2013. 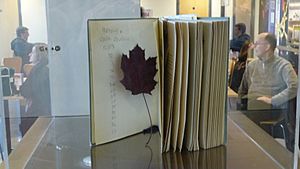 Clara's book of 101 Places to see and the leaf, as shown at the Doctor Who Experience.

Oswin Oswald is first seen in the first episode of the seventh series, "Asylum of the Daleks". She is the only survivor of the Starship Alaska. The Alaska crashed on the Asylum, a prison planet for insane Daleks. She has lived on the planet for about a year when the Doctor (Matt Smith) and his companions Amy (Karen Gillan) and Rory (Arthur Darvill) go to the Dalek Asylum to turn off the planet's force field. They are trying to do this so that an army of sane Daleks can destroy the asylum. Clara communicates with them and helps them escape from the Daleks. She also removes all of the Daleks' memories of the Doctor. She helps the group escape and the Doctor tries to rescue her. He soon learns that she has already been captured and is now a Dalek cyborg. The Daleks had tried to keep Oswin's intellect. Because her mind could not deal with being turned into a cyborg, it created a fantasy where she survived as a human. When she learned the truth, Oswin was almost taken over by her Dalek personality, but in the end she still would not kill the Doctor. She deactivated the force field. Clara makes a final request that the Doctor remember her. She then lets the Doctor, Amy, and Rory leave the planet before it is destroyed.

Clara is introduced a second time in the 2012 Christmas special "The Snowmen". This was her first episode as the Doctor's companion. She was a young barmaid and governess in 1892. She follows the Doctor after he saves her from an attack by living snowmen. The Doctor asks her to travel with him after she enters the TARDIS, his time and space machine. Soon after this, Clara falls to her death after being attacked. Her tombstone shows her full name to be Clara Oswin Oswald. The Doctor sees that she is the same woman as Oswin from the Asylum. She even says the same things Oswin had said.

Intrigued by a woman who has lived and died two times in different periods of history, he begins look across time for another Clara. The episode ends with a young woman, who could be a modern-day Clara, walking through the graveyard and stopping by Clara Oswin Oswald's tomb. In a short prequel to the post-Christmas episode, the Doctor meets the modern Clara Oswald as a child, but he does not know it is her. In "The Bells of Saint John", the modern Clara meets the Doctor after being given his phone number by a woman in a shop. After an adventure in London, the Doctor asks Clara to become his companion. In "The Rings of Akhaten", the Doctor tries to learn more about who (or what) Clara really is. After watching her parents and her childhood, he finds nothing that is not normal. The episode shows that her mother died when she was a teenager. In "Hide", the Doctor goes to a haunted mansion to ask the psychic Emma Grayling about Clara. She says Clara is just an ordinary girl. "Hide" and "Journey to the Centre of the TARDIS" also show that the TARDIS does not like Clara. In a version of time which was stopped from happening, the Doctor talks with Clara about the two previous versions of her he had met. She did not know what he is talking about.

All content from Kiddle encyclopedia articles (including the article images and facts) can be freely used under Attribution-ShareAlike license, unless stated otherwise. Cite this article:
Clara Oswald Facts for Kids. Kiddle Encyclopedia.