Clayton is a suburb of the city of Manchester in North West England. Historically in Lancashire, it is about 3 miles east of the city centre on Ashton New Road. Clayton takes its name from the Clayton family who owned large parts of land around the area, including Clayton Vale, through which the River Medlock flows (separating Clayton from Newton Heath). Clayton was under the township of Droylsden until around 1890 when alterations to the Manchester boundary took place. Other towns added to Manchester around this time were Blackley, Crumpsall, Moston, Openshaw and Gorton. 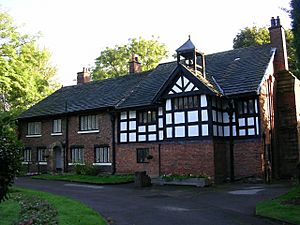 Clayton Hall is a 15th-century hall on Ashton New Road, in Manchester, hidden behind trees in a small park. The Hall is a Grade II* listed building, a scheduled ancient monument, and is rare example of a medieval moated site (grid reference SJ88099857). It was originally built for the Clayton family, it passed on into the hands of the Byron family (of which the poet Lord Byron was a member) in 1194. They lived there until they sold it to two London merchants, George and Humphrey Chetham, in 1620. Humphrey Chetham is famous for founding Chetham's School and Library in the centre of Manchester.

During the Civil War, Royalist cavalry were stationed here, before the attack on Manchester. Afterwards, according to legend, Oliver Cromwell was said to have spent three nights at the Hall. In 1897 the building was acquired by Manchester City Corporation, ensuring its survival.

Philips Park is on the south side of the River Medlock and Philips Park Cemetery is on the north side. The park has the distinction of being Manchester's first public park and Mark Philips, who was the Member of Parliament for Manchester, opened it in 1846. It was the first of its kind in the whole of the then Great Britain and Ireland and it set the standard for many others that soon followed in towns and cities throughout Britain. It was designed to have walks, expansive lakes and glasshouses for exotic plants. It is also famous for its annual tulip festival, which is still held every year. Philips Park Cemetery was opened in 1863.

The majority of houses in Clayton are council homes. The first council (or then known as corporation) homes to be built took place around the late 1920s, building near the border of Droylsden (Bristowe Street and South Crescent, followed by North Crescent). Many more homes were to be built afterwards, building on a brick works surrounding Clayton Street, a golf course off what is now Folkstone Road West and East and cricket & football grounds off North Road and Vale Street, now known as Lingfield Road. The building associated with the cricket and football grounds still stands today, now used as a boxing club.

Frank Pritchard, who lived in Clayton as young child in the 1920s, recalls in his book East Manchester Remembered: "... Clayton was rather a posh area. Beyond Bank Street one rarely saw children bare-footed, or with their breeches' behind torn and tattered which were common sights in the streets round where I lived."

After a period of general decline from around the mid to late 1980s to around 2004, Clayton residents have since seen some improvements along its main routes, both in terms of housing repairs/modernisation and road reconstructions. In 2009-10 these improvements were extended to some of Clayton's back streets, including the Stanton Street and surrounding areas.

All content from Kiddle encyclopedia articles (including the article images and facts) can be freely used under Attribution-ShareAlike license, unless stated otherwise. Cite this article:
Clayton, Manchester Facts for Kids. Kiddle Encyclopedia.