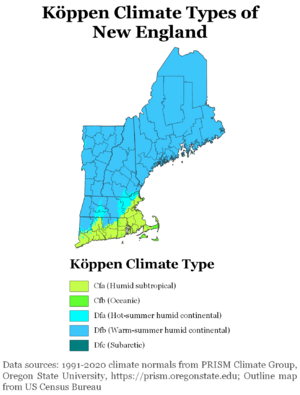 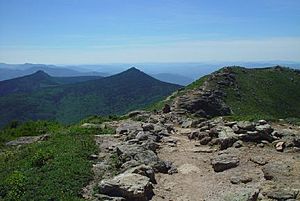 The White Mountains of New Hampshire are part of the Appalachian Mountains. 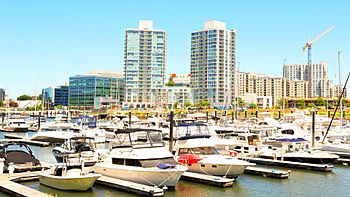 The climate of New England varies greatly across its 500-mile (800 km) span from northern Maine to southern Connecticut.

Maine, Vermont, New Hampshire, and most of interior Massachusetts and upland interior Connecticut have a humid continental climate (Dfb under the Köppen climate classification). In this region, the winters are long, cold, and heavy snow is common (most locations in this region receive 60 to 120 inches or 1.52 to 3.05 metres of snow annually). The summer months are moderately warm, though summer is rather short. Annual rainfall is spread evenly throughout the year. Cities like Bangor, Maine, Portland, Maine, Manchester, New Hampshire, Burlington, Vermont, and Pittsfield, Massachusetts average around 45 inches (1,100 mm) of rainfall and 60 to 90 inches (1.52 to 2.29 m) of snow annually.

In eastern Massachusetts, northern Rhode Island, and northern Connecticut, a hot-summer version of the humid continental climate (Köppen Dfa) prevails. Here summers are hotter and winters shorter with less snowfall. Cities like Boston, Hartford, and Providence generally receive 35 to 50 inches or 0.89 to 1.27 metres of snow annually. Summers can occasionally be hot and humid, with high temperatures in the lower Connecticut River valley of southern Massachusetts and Connecticut between 80 and 90 °F (27 and 32 °C) on a regular basis during June, July, and August. Convective thunderstorms are common in these months as well, some of which can become severe. The frost-free growing season ranges from 140 days in parts of central Massachusetts to near 160 days across interior Connecticut and most of Rhode Island.

Coastal Rhode Island and southern Connecticut are the broad transition zone from continental climates to the north, to temperate climates (called subtropical in some climate classifications) to the south. In this region, summers can be quite long and hot, with humid, tropical air masses common between May and September. Convective thundershowers are common in summer. The coast of Connecticut from Stamford, through the New Haven area to the New London, and Westerly and Newport, Rhode Island area is usually the mildest area of New England in winter. Winter precipitation in this area frequently falls in the form of rain or a wintry mix of sleet, rain, and wet snow. Seasonal snowfall is far less across far southern Connecticut and coastal Rhode Island than it is across interior and Northern coastal areas (only 24 to 30 inches or 0.61 to 0.76 metres of snow annually). Cold snaps in this far southern zone also tend to be shorter and less intense than points north. Winters also tend to be sunnier and warmer in southern Connecticut and southern Rhode Island compared to northern and central New England. The frost-free growing season approaches 200 days along the Connecticut coast.

All content from Kiddle encyclopedia articles (including the article images and facts) can be freely used under Attribution-ShareAlike license, unless stated otherwise. Cite this article:
Climate of New England Facts for Kids. Kiddle Encyclopedia.