Climate of Massachusetts facts for kids 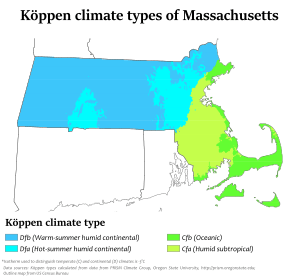 A blizzard after hitting Boston on February 12, 2006

The climate of Massachusetts is mainly a humid continental climate, with warm summers and cold, snowy winters. Massachusetts is a state located in the New England region of the northeastern United States. Most of its population of 6.4 million live in the Boston metropolitan area. The eastern half of this relatively small state is mostly urban and suburban. Massachusetts is the most populous of the six New England states and ranks third in overall population density and fourth by GDP per capita. Massachusetts receives about 50 inches (1016 mm) of rain annually, fairly evenly distributed throughout the year, slightly wetter during the winter. Summers are warm with average high temperatures in July above 80 °F (26.7 °C) and overnight lows above 60 °F (15.5 °C) common throughout the state. Winters are cold, but generally less extreme on the coast with high temperatures in the winter averaging above freezing even in January, although areas further inland are much colder. The state does have extreme temperatures from time to time with 90 °F (32.2 °C) in the summer and temperatures below 0 °F (-17.8 °C) in the winter not being unusual.

The state has its share of extreme weather, prone to nor'easters and to severe winter storms. Summers can bring thunderstorms, averaging around 30 days of thunderstorm activity per year. Massachusetts averages one tornado per year. Massachusetts, like the entire United States eastern seaboard, is vulnerable to hurricanes. Because its location is farther east in the Atlantic Ocean than states farther south, Massachusetts has suffered a direct hit from a major hurricane three times since 1851, the same number of direct hits suffered by the southern Atlantic state of Georgia. More often hurricanes weakened to tropical storm strength pass near Massachusetts.

With the exception of extreme southern Connecticut, all of New England has a humid continental climate or in a broad transition zone, with hot summers and cold winters. Owing to thick deciduous forests, fall in New England brings bright and colorful foliage, which comes earlier than in other regions, attracting tourism. Springs are generally wet and cloudy. Average rainfall generally ranges from 1,000 to 1,500 mm (40 to 60 in) a year. Snowfall can often exceed 100 in (2,500 mm) annually.

A map of the Humid continental climate zone around the world, including Massachusetts.

Western, central and interior northeastern Massachusetts's climate is the continental climate type.This is found over large areas of land masses in the temperate regions of the mid-latitudes where there is a zone of conflict between polar and tropical air masses. The Humid continental climate is marked by variable weather patterns and a large seasonal temperature variance. The seasonal temperature variance can be as great as 91 °F (51 °C), but is typically about 59 °F (33 °C) to 71 °F (39 °C). The temperature difference between the warmest and coldest months increases as one moves further inland and away from the moderating influence of the ocean. Places with a hottest monthly temperature above 50 °F (10 °C) and a coldest monthly temperature below 27 °F (−3 °C), and which do not meet the criteria for an arid climate, are classified as continental. Beverly, Lynn, Cambridge, Boston, and the Interstate 95 corridor southwest of Boston begin a broad transition zone into subtropical or oceanic climates, with slightly warmer winters. The only areas in Massachusetts that are transitioning to an oceanic climate are Cape Ann, parts of the South Shore and South Coast, Cape Cod and the islands. These areas have a moderate influence by the North Atlantic current, which has an impact on Bermuda and the British Isles as well.

Massachusetts is often hit with storms called "'nor'easters" during the winter months of the year. A nor'easter is a storm along the East Coast of the United States. The storm is so named because the winds in a nor'easter come from the northeast, especially in the coastal areas of the Northeastern United States and Atlantic Canada. More specifically, it describes a low pressure area whose center of rotation is just off the East Coast and whose leading winds in the left forward quadrant rotate onto land from the northeast. The precipitation pattern is similar to other extratropical storms. Nor'easters also can cause coastal flooding, coastal erosion, hurricane force winds, and heavy snow. Nor'easters can occur at any time of the year but are mostly known for their presence in the winter season. Most Nor'easters start from a low-pressure system that forms in the south, most often the Gulf of Mexico, and are drawn across to the Northeast by the jet stream. The divergence or diffluence in the upper atmosphere caused by the jet stream removes and disperses the rising air at a faster rate than it is replaced at the surface, which, along with the Coriolis Effect, creates and develops a storm. Their northeast track brings them up the East Coast past the mid-Atlantic and New England coastal states. The counterclockwise flow around a low pressure system brings the warm moist oceanic air over land. The warm moist air meets cold air carried southward by the trough. The deepening low enhances the surrounding pressure gradient, which acts to spiral the very different air masses toward each other at an even faster rate. The greater the temperature differences between the two air masses, the greater the turbulence and instability, and the more severe the storm can become.

If the nor'easter takes the East Coast track, that usually indicates the presence of a high pressure area in the vicinity of Bermuda. The storm will then reach the North Carolina coast and begin to develop. At this time, the nor'easter can move slightly offshore, which would be the more destructive path, or can move slightly inland, which would present mostly rain. If it takes the offshore path, it would begin to rapidly strengthen. The effects would then start reaching the major cities of the Northeast, such as Boston. The storm, now rapidly intensifying, tracks northward. These storms sometimes intensify during their entire existence. The storm moves northward, following the topography of the East Coast. It usually reaches its peak intensity while off the Canadian coast. The storm then reaches Arctic areas, and can reach intensities equal to a strong hurricane. They then meander throughout the North Atlantic and can last for several weeks.

Massachusetts is seldom hit by tornadoes, but has been part of one particularly notable event, the Flint-Worcester tornado outbreak sequence, on June 9, 1953. The massive Worcester tornado was on the ground for nearly an hour and one half. In that period it traveled 46 miles (74 km), reached 1-mile (1.6 km) in width and injured 1,300 people. At 5:08 P.M., the tornado entered Worcester and grew to an unprecedented width of one mile. Damage was extensive in Worcester (second largest city in Massachusetts) and in some areas equaled the worst damage in any U.S. tornado. Hardest-hit areas included Assumption College, where a priest and two nuns were killed. The main building's 3-foot (0.91 m)-thick brick walls were reduced by three floors, and the landmark tower lost three stories. The nearby Burncoat Hill neighborhood saw heavy devastation (especially on its western slope), but it was the Uncatena-Great Brook Valley neighborhoods to the east of Burncoat Hill that were leveled, houses simply vanishing and debris swept clean from the sites. Forty people died in the Uncatena-Great Brook Valley areas alone. A 12-ton bus was picked up, rolled over several times and thrown against the newly constructed Curtis Apartments in Great Brook Valley, resulting in the deaths of two passengers. The Curtis Apts. blueprints were blown all the way to Duxbury, 75 miles (121 km) away. Across Boylston St. from the Curtis Apts., the Brookside Home Farm (a city-operated dairy facility and laundry) sustained total damage, with six men killed and the loss of its herd of 80 Holsteins. Wrecked houses and bodies were blown into Lake Quinsigamond. The six fatalities at Brookside were the most in any particular building in the tornado. Ninety-four people were killed. 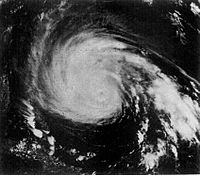 Massachusetts has been hit by many notable tropical cyclones. One of these was the New England Hurricane of 1938. The storm formed near the coast of Africa in September of the 1938 Atlantic hurricane season, becoming a Category 5 hurricane on the Saffir-Simpson Hurricane Scale before making landfall as a Category 3 hurricane on Long Island on September 21. The hurricane killed over 682 people, damaged or destroyed over 57,000 homes, and caused property losses estimated at $4.7 billion (2005 US dollars). In 1951 damaged trees and buildings were still to be seen in the affected areas. The eye of the storm followed the Connecticut River north into Massachusetts, where the winds and flooding killed 99 people. In Springfield, the river rose to 6 to 10 feet (2 to 3 m) above flood stage, causing significant damage. Up to 6 inches (152 mm) of rain fell across western Massachusetts, which combined with over 4 inches (102 mm) that had fallen a few days earlier produced widespread flooding. Residents of Ware were stranded for days, and relied on air-dropped food and medicine. After the flood receded, the town's Main Street was left a chasm in which sewer pipes could be seen. To the east, the surge left Falmouth and New Bedford under 8 feet (2.4 m) of water. Two-thirds of all the boats in New Bedford harbor sank. The Blue Hills Observatory registered sustained winds of 121 mph (195 km/h) and a peak gust of 186 mph (299 km/h).

All content from Kiddle encyclopedia articles (including the article images and facts) can be freely used under Attribution-ShareAlike license, unless stated otherwise. Cite this article:
Climate of Massachusetts Facts for Kids. Kiddle Encyclopedia.