Colchuck Peak is an 8,705-foot (2,653-metre) mountain located in the Stuart Range, in the Alpine Lakes Wilderness in Chelan County of Washington state. The nearest higher peak is Dragontail Peak, 0.49 mi (0.79 km) to the east, and Argonaut Peak lies 0.9 mi (1.4 km) to the southwest. The Colchuck Glacier which lies on the northeast slopes of the peak melts into Colchuck Lake. The mountain and glacier take their name from the lake, which in Chinook jargon means "cold water". Precipitation runoff from the peak drains north into Mountaineer Creek, a tributary of Icicle Creek, or south into Ingalls Creek, all of which winds up in the Wenatchee River. 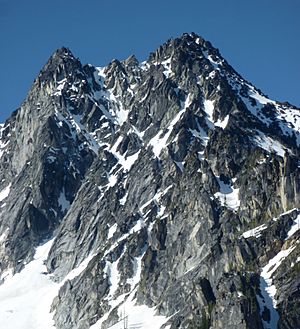 The history of the formation of the Cascade Mountains dates back millions of years ago to the late Eocene Epoch. With the North American Plate overriding the Pacific Plate, episodes of volcanic igneous activity persisted. In addition, small fragments of the oceanic and continental lithosphere called terranes created the North Cascades about 50 million years ago. Colchuck Peak is situated in part of the Mount Stuart batholith, a large area of clean granite rock that forms the Stuart Range. 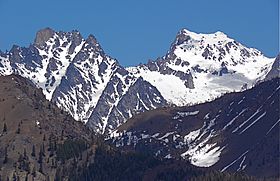 All content from Kiddle encyclopedia articles (including the article images and facts) can be freely used under Attribution-ShareAlike license, unless stated otherwise. Cite this article:
Colchuck Peak Facts for Kids. Kiddle Encyclopedia.