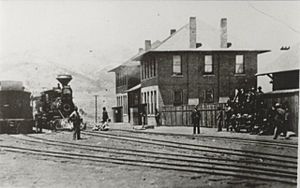 The Como School is listed on the National Register of Historic Places. 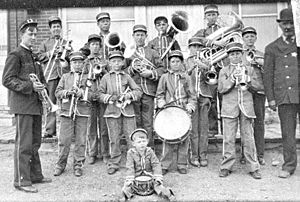 Como is an unincorporated community in Park County in the Rocky Mountains of central Colorado, United States. According to the 2010 census, the population of zip code 80432 is 439, including surrounding subdivisions in a 15 mile radius. Metropolitan Como proper usually has a population of 12 to 15 residents, within the Como plat.

It is believed the town was named by miners from Como, Italy, who worked the coal fields of the area. In 1879, the town became the location of a depot of the Denver, South Park and Pacific Railroad, which was extended over Kenosha Pass to reach the silver mining areas during the Colorado Silver Boom. Later, the town served as a division point for trains going northward over Boreas Pass and southward toward Garos and over Trout Creek Pass at the western end of South Park. The town has many historic weathered structures, including the roundhouse, hotel, and depot and has the air of a ghost town that is still nevertheless populated, by twenty people. It has a small commercial district consisting of a post office, gallery, hotel. The depot has been renovated with plans to make it an area tourist attraction.

With a population in the 1910 census of 475, 36 more than in 2010, Como was then the largest community in Park County. There were eighty-three children of school age that year. The former Como High School had begun in an abandoned Presbyterian Church, which was moved to another site. The school closed in either 1940 or 1941, by which time railroad service to Como had already ended some three years earlier. The remaining pupils were bused to Fairplay. The old Como High School building was left intact and used for the storage of decades of school records and memorabilia, items which were rediscovered in the 1990s. The former school, with a well-preserved classroom, is open to the public only once annually, on Boreas Pass Railroad Day, but students may visit on field trips. The school provides a glimpse into yesteryear.

Como is located at the northern end of South Park, Como is an historic railroad settlement. It sits approximately one-half mile (1 km) west of U.S. Route 285 and some nine miles (15 km) northeast of the county seat of Fairplay. Como is accessible by a paved County Road 33, which becomes gravel inside the town. Boreas Pass Road runs northwest over Boreas Pass to Breckenridge. The mountains northwest of Como form a dramatic background to the site of the town on the flank of Little Baldy Mountain.

Of Interest Fun Stuff To Do The U.S. Post Office in Como (ZIP Code 80432) is located within Mountain Man Gallery, an art gallery which displays the work of mainly local artists. Locally made crafts and gifts are also available here. .

Camp Como! offers groups of all ages the perfect combination of fun activities, comfortable, mountain-top excitement and Christian-based programs at an easy-to-access location.

Boreas Pass Boreas Pass Road is a 19.5 mile lightly trafficked out and back trail located in Como it ends in Breckenridge, CO. It features a great forest setting and is good for all mountain biker skill levels. The trail offers a number of activity options and is accessible from May until October. In the warm months this is a fun drive, and often a top destination spot for the best viewing of the changing of the aspen in fall.

The Gold Dust Trail (#698) begins on Boreas Pass Road and ends on Pine Street a mile outside of Como, Colorado or vice versa. This is a favorite locals hike or mountain biking route. Snowshoeing is highly recommended, as is locating favorite sledding spots in winter.

The trail begins 10 miles up Boreas Pass Road from Como on the west side of the road at a post and brown carsonite #698 marker. The initial 1.5 mile descent from Boreas Pass Road to N. Tarryall Creek Road (Forest Road 801) is identified on USGS maps as "Old Boreas Pass Wagon Road". This is a fun, fast, rocky-at-times, furious descent.

The Como Roundhouse This striking building presents an unusual use of stone as a building material. It's a railroad roundhouse in the small town of Como, at an elevation of about 9800 feet in the Colorado Rockies. As the image below shows, a roundhouse is a round structure built around a turntable of railroad track, and it has bays to house locomotives brought into it via the turntable for maintenance and repairs.

The Como Depot The Como Railroad Depot is one of three surviving structures listed on the National Register of Historic Places in 1983. The Denver South Park & Pacific Railroad (DSP&PR) arrived in Como by 1879, and it is believed the Depot was built some months earlier. The railroad line extended over Boreas Pass and eventually into Leadville, and by then Como housed the most important facilities for the DSP&PR outside of Denver. Como remained vital for decades due to constant railroad traffic; train service operated 24 hours a day and the town grew exponentially due to its role as a key switch and maintenance site. The Como Depot is currently used as a Museum/Visitors Center in warm months. Hours vary.

It is highly recommended to take a walking tour through town as idyllic photo opportunities are everywhere.

All content from Kiddle encyclopedia articles (including the article images and facts) can be freely used under Attribution-ShareAlike license, unless stated otherwise. Cite this article:
Como, Colorado Facts for Kids. Kiddle Encyclopedia.