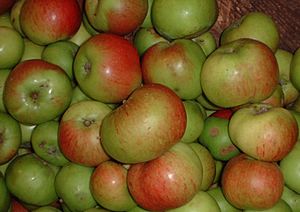 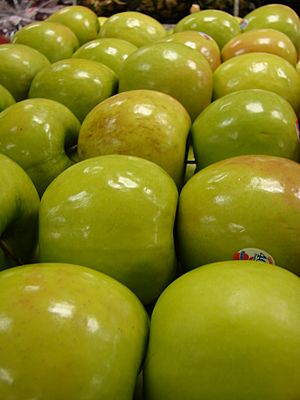 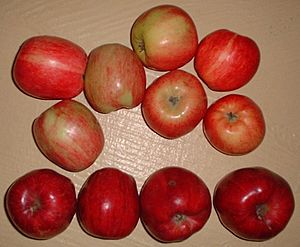 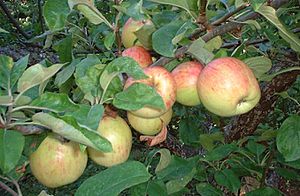 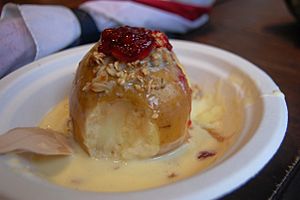 A cooking apple or culinary apple is an apple that is used primarily for cooking, as opposed to a dessert apple, which is eaten raw. Cooking apples are generally larger, and can be tarter than dessert varieties. Some varieties have a firm flesh that does not break down much when cooked. Culinary varieties with a high acid content produce froth when cooked, which is desirable for some recipes. Britain grows a large range of apples specifically for cooking. Worldwide, dual-purpose varieties (for both cooking and eating raw) are more widely grown.

Apples can be cooked down into sauce, apple butter, or fruit preserves. They can be baked in an oven and served with custard, and made into pies or apple crumble. In the UK roast pork is commonly served with cold apple sauce made from boiled and mashed apples. Bramley apple is by far the most popular cooking apple in the United Kingdom, while Granny Smith may be the most popular in the United States and Australia (where it originated).

A baked apple is baked in an oven until it has become soft. The core is usually removed and the resulting cavity stuffed with fruits, brown sugar, raisins, or cinnamon, and sometimes a liquor such as brandy. An apple dumpling adds a pastry crust.

Properties of a good apple — Apples for table are characterised by a firm pulp, elevated, poignant flavour, regular form, and beautiful colouring; those for kitchen use by the property of falling as it is technically termed, or forming in general a pulpy mass of equal consistency when baked or boiled, and by a large size. Some sorts of apples have the property of falling when green, as the Keswick, Carlisle, Hawthornden, and other codlins; and some only after being ripe, as the russet tribes. Those with this property when green are particularly valuable for affording sauces to geese early in the season, and for succeeding the gooseberry in tarts.

All content from Kiddle encyclopedia articles (including the article images and facts) can be freely used under Attribution-ShareAlike license, unless stated otherwise. Cite this article:
Cooking apple Facts for Kids. Kiddle Encyclopedia.