Corinna is a town in Penobscot County, Maine, United States. The population was 2,198 at the 2010 census. It is part of the Bangor metropolitan statistical area.

It was first called T4 R4 NWP (or Township 4, Range 4, North of the Waldo Patent). On June 30, 1804, Dr. John Warren of Boston bought 23,040 acres (93 km2) on speculation from Massachusetts for two cents an acre, or $460.80. To encourage settlement, he gave away some land and built a combination gristmill and sawmill. The town would be incorporated on December 11, 1816, as Corinna, named after Dr. Warren's daughter.

The first homes were built of hewn logs. Corinna developed into a farming community, with water powered mills at the outlet of Corundel Lake. After the arrival of the Dexter and Newport Railroad in 1865-1866, the village developed into a small mill town. Industries would include sawmills, planing mills, woolen textile mills, and a door, sash and blind factory. There were also boot and shoemaking shops and an iron foundry. The Eastland Woolen Mill manufactured woolen materials from the 1930s until it closed in 1997, after which it was demolished. The town is now largely a bedroom community of Bangor. 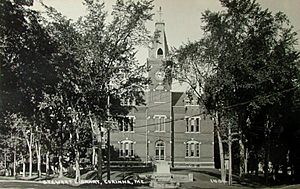 The Stewart Free Library (1898), a gift to the town by Corinna-born Minneapolis millionaire Levi M. Stewart, was designed by Minneapolis architect William Harrison Grimshaw. The library is listed on the National Register of Historic Places, and contains well-preserved historic interiors as well as a majestic facade with clocktower. It resembles a mid-western county courthouse more than a typical small-town Maine library. The Corinna Union Academy educated students in the town from 1851 to 1968.

A memorial dedicated to the soldiers that have died in the War on Terror is located near the river. It is made out of marble and incised with the names of fallen soldiers.

According to the United States Census Bureau, the town has a total area of 39.46 square miles (102.20 km2), of which, 38.68 square miles (100.18 km2) of it is land and 0.78 square miles (2.02 km2) is water. Situated beside Corundel Lake, Corinna is drained by the East Branch Sebasticook River and Alder Stream, both part of the Kennebec River watershed.

The town is located at the intersection of Route 7 (Dexter Road), Route 11 (Exeter Road) and Route 43 (St. Albans Road), and is centered between the towns of Exeter, St. Albans, Dexter and Newport, about 8 miles (13 km) north of Interstate 95. Corinna is also located on the Newport/Dover-Foxcroft Rail Trail, which was developed along a former Maine Central Railroad line after tracks and ties were removed in 1993.

This climatic region is typified by large seasonal temperature differences, with warm to hot (and often humid) summers and cold (sometimes severely cold) winters. According to the Köppen Climate Classification system, Corinna has a humid continental climate, abbreviated "Dfb" on climate maps.

There were 926 households of which 28.8% had children under the age of 18 living with them, 50.8% were married couples living together, 9.7% had a female householder with no husband present, 6.7% had a male householder with no wife present, and 32.8% were non-families. 25.3% of all households were made up of individuals and 11.4% had someone living alone who was 65 years of age or older. The average household size was 2.37 and the average family size was 2.81.

There were 842 households out of which 31.0% had children under the age of 18 living with them, 60.0% were married couples living together, 8.2% had a female householder with no husband present, and 26.2% were non-families. 21.0% of all households were made up of individuals and 10.7% had someone living alone who was 65 years of age or older. The average household size was 2.55 and the average family size was 2.89.

All content from Kiddle encyclopedia articles (including the article images and facts) can be freely used under Attribution-ShareAlike license, unless stated otherwise. Cite this article:
Corinna, Maine Facts for Kids. Kiddle Encyclopedia.