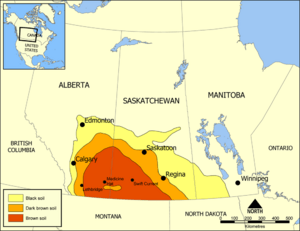 The Coteau du Missouri, or Missouri Plateau, is a large plateau that stretches along the eastern side of the valley of the Missouri River in central North Dakota and north-central South Dakota in the United States. In the Canadian provinces of Saskatchewan and Alberta this physiographic region is classified as the uplands Missouri Coteau, which is a part of the Great Plains Province or Alberta Plateau Region, which extends across the southwest corner of the province of Saskatchewan as well as the southeast corner of the province of Alberta. Historically, in Canada the area was known as the Palliser's Triangle regarded as an extension of the Great American Desert and unsuitable for agriculture and thus designated by Canadian geographer and explorer John Palliser. The terrain of the Missouri Coteau features low hummocky, undulating, rolling hills, potholes, and grasslands. Apart from being a geographical area, the Coteau du Missouri also has a cultural connection to the people of the area, the Metis people of South Dakota along with other Indigenous groups. The history of this plateau is large, and the Coteau du Missouri has a significance to these people. 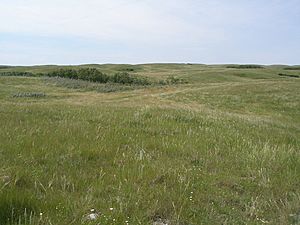 Geologically, the plateau is part of the extended plateau of the Great Plains in the Dakotas, and is separated from the main plateau to the west by the Missouri River Trench. The plateau is underlain by Pierre shale covered with hardened deposits from repeated glaciations. The plateau also contains deposits of lignite, mirabilite (sodium sulfate), and bentonite. While subjected to continental glaciation, it was north and west of the Driftless Area, an area which escaped glaciation. Agriculturally, The Coteau de Missouri is known for grains and livestock agriculture, because the land cannot sustain many other forms of agriculture or farming.

The Coteau du Missouri is known for being an area with difficult growing and agricultural conditions, and this is because of the weather and specific soil conditions of the land that makes growing a difficulty for this area. The plateau is poorly drained and is interspersed with glacial water deposits. This is because of the poor drainage in the area, and the Coteau du Missouri’s close proximity to the kettle lakes Region. It is transversed by several broad sags marking the ancient stream valleys of the eastern continuations of the Grand, Moreau, Cheyenne, Bad, and White rivers. To the east of the plateau, the lowland valley of the James River was formed by the lobe of the most recent ice age, separating the plateau from the Coteau des Prairies substantially. This specific area is also attached to the Canadian prairies, with forests and elevated areas remaining at a minimum on these flat lands.

All content from Kiddle encyclopedia articles (including the article images and facts) can be freely used under Attribution-ShareAlike license, unless stated otherwise. Cite this article:
Coteau du Missouri Facts for Kids. Kiddle Encyclopedia.