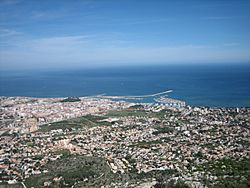 View of Dénia from the Montgó out to sea 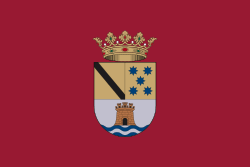 Dénia ( Spanish: Denia), is a historical coastal city in the province of Alicante, Spain. It is on the Costa Blanca halfway between Alicante and Valencia. It is the capital and judicial seat of the comarca of Marina Alta. As of 2014[update], 41,672 people live there.

All content from Kiddle encyclopedia articles (including the article images and facts) can be freely used under Attribution-ShareAlike license, unless stated otherwise. Cite this article:
Denia Facts for Kids. Kiddle Encyclopedia.