Lokuge Dinesh Chandimal (Sinhala: දිනේෂ් චන්දිමාල්; born 18 November 1989) is a professional Sri Lankan cricketer of the Sri Lanka national cricket team and a former captain of all formats. A handy and agile right-handed batsman who sometimes plays as the wicket-keeper middle order batsman, Chandimal was the first captain to lead Sri Lanka in their first day-night Test match.

Chandimal was a key member of 2012 ICC World Twenty20 runner-up team and 2014 ICC World Twenty20 winning team. He led Sri Lanka in first group stage of the 2014 ICC World Twenty20, until was suspended for slow over rate and subsequently lost the place in the team for the remainder of the tournament. On 26 September 2019, he joined the Sri Lankan Army as a volunteer commissioned officer and was eligible to play for Sri Lanka Army Sports Club. In August 2020, while playing for the Sri Lanka Army Sports Club, Chandimal made the highest total in domestic first-class cricket in Sri Lanka, with an unbeaten 354 runs.

On 26 December 2004, Dinesh was just a 14-year-old boy when his family home was destroyed by the Indian Ocean Tsunami tragedy. He still frequents Balapitiya, to memorize the tragic incident which devastated his family.

Chandimal is the first child in the family. He has four younger brothers. First brother, Nirosh Lakmal was born in 1992, second brother Imesh Madhumal in 1996. Third brother Kamesh Nirmal was born in 2000 and the youngest Ayesha Shashimal was born in 2005. Nirosh and Imesh studied in Ambalangoda Dharmashoka College, whereas Kamesh and Ayesha in Ananda College, Colombo.

Only Kamesh played cricket and went through Chandimal's footsteps. During second round of the Inter School Under-17 Division I tournament in 2017, Kamesh scored a match winning century against St. Xavier's College, Marawila and Ananda won the match by 129 runs. Following his brother's foot steps Kamesh scored a brilliant century in the 89th Battle of the Maroons.

Chandimal started his cricketing career as a teenager at his first school Dharmasoka College, Ambalangoda. Later he moved to Ananda College, Colombo captaining the under-17 team. In 2008, he was appointed captain of the school's first eleven, which he led in 13 outright wins in a season, re-writing history in Sri Lankan school cricket. He was the first schoolboy cricketer to exceed 1,000 runs with an aggregate of 1,580, and won the Schoolboy Cricketer of the Year Award in 2009. After leaving school, he joined the Nondescripts Cricket Club

In First class career, he scored 64, 04, and 109 in his first three innings for Sri Lanka Cricket Development XI. He is an aggressive batsman who scored two centuries for his country's U-19s, which he vice-captained, and played for the Sri Lanka Cricket XI and Schools Invitation XI for List A and Twenty20 cricket.

On 19 February 2019, Chandimal scored a century in the 2018–19 SLC Twenty20 Tournament, a day after he was dropped from Sri Lanka's One Day International (ODI) squad for their series against South Africa.

In March 2019, he was named as Colombo's captain for the 2019 Super Provincial One Day Tournament. In August 2020, in the final round of matches in the 2019–20 Premier League Tournament, Chandimal scored 354 not out, batting for Sri Lanka Army Sports Club. It was the highest first-class score in a domestic match in Sri Lanka, beating the previous record of 351 runs scored by Kithuruwan Vithanage.

In October 2020, he was drafted by the Colombo Kings for the inaugural edition of the Lanka Premier League. 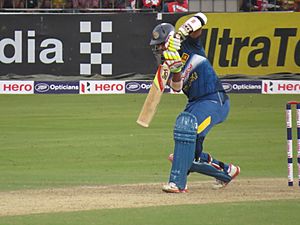 Chandimal batting against England in 2014

He made his international debut during the 2010 ICC World Twenty20 in the West Indies, playing in Sri Lanka's group games against New Zealand and Zimbabwe in the initial group stage and then playing against Australia in the "Super Eight" final series.

After also playing against New Zealand in a Twenty20 International match in Florida, Chandimal was selected for an ODI tri-series in Zimbabwe, where the two sides also played India. He made his debut against Zimbabwe, scoring an unbeaten 10 as his side cruised to a nine-wicket win and then registered his maiden international century by scoring 111 runs off 118 balls against India, an innings that helped his side both win the match (by six wickets) and knock India out of the tournament. He also became the youngest Sri Lankan to score an ODI century. 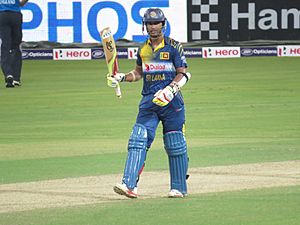 Chandimal made his Test debut for Sri Lanka in December 2011, in the second Test of the series against South Africa in Durban. He made half-centuries (58 and 54) in each of Sri Lanka's innings becoming the first Sri Lankan batsman to score half centuries in both innings on Test debut. This incidentally led Sri Lanka to their first Test win in South Africa.

During 2015 ICC Cricket World Cup, against Australia in Sydney, Chandimal scored 50 off 22 balls, this was the fastest fifty by a Sri Lankan batsman in Cricket world cup history, before Angelo Mathews scored a 20-ball fifty, where Sri Lanka had a massive 377 target to chase. During the innings, he was retired hurt, and eventually Sri Lanka lost the match by 64 runs.

Chandimal was included to the test series with India as the permanent wicket-keeper and showed an excellent talent in the test level as well. In the first innings, he scored 59 runs but eventually Sri Lanka were all out for 183. In the second innings after India's huge 375 runs, Sri Lanka were all out for 367 runs courtesy of Chandimal's brilliant knock of unbeaten 162 runs. He was the star for the Sri Lankan innings with 16 fours and 4 sixes. Sri Lanka had a 175 lead and India were just ended with 112 runs and Sri Lanka won the match by 63 runs. Due to Chandimal's batting performance in the right time, he was adjudged as man of the match.

His third ODI century came after five years of delay, against Ireland on 16 June 2016.

Chandimal had an impressive run scoring throughout the England series in 2016 and then in Australia series at home. He scored five consecutive ODI half centuries, which equals most consecutive ODI fifties by a Sri Lankan with Jayasuriya, Sangakkara and Dilshan. He missed the Sri Lankan record, when he was declared LBW by Adam Zampa on 48, just short of 2 runs for Chandimal's sixth consecutive fifty. Chandimal finished the England series with scores of 52, 62, 63 and 53 and in first ODI against Australia, he scored his fifth consecutive fifty with unbeaten 80.

Chandimal was not initially selected for the limited over series against India, but after the injury to Danushka Gunathilaka, Chandimal was brought into the ODI side. He played in the third ODI as the opener with Niroshan Dickwella and scored 37 runs, when he hit by a bouncer and injured his right thumb. After the conclusion of Sri Lanka's innings, media reported that he has a hairline fracture and ruled out of the Indian tour.

On 17 July 2013, Chandimal became the youngest ODI captain for Sri Lanka, when he was appointed as the ODI captain for first two matches against South Africa in Colombo. In 2013, he was also appointed captain of the Sri Lanka Twenty20 International side and also vice-captain of the country's one day international team. During the 2014 ICC World Twenty20, he stepped down from the captaincy after injury and suspension due to slow over rate and later Lasith Malinga appointed as the captain. Malinga was able to lead the team for their first ever Twenty20 champion title and this strengthen Malinga as the permanent captain of the Twenty20 team.

He led the ODI team and T20I team in many occasions, where the permanent captains Angelo Mathews and Lasith Malinga were injured in many occasions. However, after many poor performances in bilateral series and in 2017 ICC Champions Trophy, Chandimal was dropped from limited over squads. During Zimbabwe tour, he was again dropped from the ODI squad as well. However, after terrible loss to Zimbabwe at home for the first time, the captaincy of Mathews was questioned and criticized by many critics. The result was, Mathews stepped down from the role in all formats on 11 July 2017. With that, Chandimal was named permanent captain of the Test team for Sri Lanka.

His first test captaincy came during the one-off Test against Zimbabwe in July 2017. In the match, Chandimal scored 55 in the first innings, which is recorded as the highest test score by a debut captain in a first innings for Sri Lanka as well. Sri Lanka won the match by 4 wickets at the end, by chasing massive total of 388 runs. This chase was recorded as the best chase by Sri Lanka in Tests and best successful chase in Asia.

However prior to India tour, Chandimal was contracted pneumonia and ruled out of the first test. Rangana Herath was appointed as the stand-in captain in the first match. However, with two more injuries during the match, Sri Lanka lost the match by 304 runs. Sri Lanka lost all three games, with the heaviest defeats recorded at home.

During the first Test against Pakistan on 28 September at Abu Dhabi, Chandimal scored his maiden Test century as captain, which lasted unbeaten for nine hours. He scored 155 runs the match and guided the team to 400 runs for the first innings. With the magical spin from maestro Rangana Herath and Dilruwan Perera, Sri Lanka finally won the match by 21 runs, despite a low score in the second innings.

During the second Test against India at Nagpur, Sri Lanka experiences their heaviest defeat in test cricket. Skipper Chandimal was the only stand out performer in the match with two fifties in the match. In the third Test, Chandimal scored his tenth test century, becoming the fastest Sri Lankan to reach ten test centuries with 80 innings, bettering previous record of 84 innings by Thilan Samaraweera. He along with Angelo Mathews had a 181-run partnership in the match. For the partnership, they have faced 476 balls, which ranked as the longest partnership for any pair at the Kotla, longest partnership between a visiting pair in India in the last five years, and the second-longest stand for Sri Lanka against India.

In 2018, Mathews was appointed as the permanent limited over captain after the debate over few weeks. However, in the first match against Zimbabwe in Bangladesh Tri-series, Mathews was sidelined with a right hamstring injury and removed from the squad for three weeks. With that, Chandimal was appointed as the captain. Under his captaincy, Sri Lanka won the tri-series beating Bangladesh in the final.

On 7 February 2018, Chandimal was appointed as the captain for T20I side for Sri Lanka for Bangladesh tour, due to injury of permanent limited over captain Angelo Mathews. Under his captaincy, Sri Lanka chased a record breaking total of 193 in the first match and won the match by 6 wickets.

Chandimal was included to the one-off Twenty20 International against South Africa on 14 August 2018. He played as the wicket-keeper in the match as well. South Africa bowled out for 99 runs, which is their lowest score in T20Is. However, Sri Lanka lost 7 wickets in the easy chase, where Chandimal protected his end until the end. He was there at the end and held firm through sustained pressure from the South African pack to see Sri Lanka home with an unbeaten 36 runs.

He was appointed limited overs captain after Matthews was sacked after 2018 Asia Cup. Due to poor performances throughout New Zealand and Australia tours, Chandimal was dropped from the Test squad for South Africa tour. Dimuth Karunaratne was named as the stand-in captain for the tour, while Chandimal was released to play domestic cricket and regain his form with the bat. In December 2019, Chandimal was recalled for the Pakistan test series.

On Mar 8 2021, Sri Lanka tour of West Indies, during 3rd T20I match Chandimal scored his fifth T20I half century. He scored unbeaten 54* runs and put an unbeaten stand of 85 from 63, Sri Lanka's highest in T20Is for the fifth wicket - between Dinesh Chandimal and Ashen Bandara. They had dragged the Sri Lanka team to 46 for 4 to 131 for 4.

All content from Kiddle encyclopedia articles (including the article images and facts) can be freely used under Attribution-ShareAlike license, unless stated otherwise. Cite this article:
Dinesh Chandimal Facts for Kids. Kiddle Encyclopedia.