Districts of Luxembourg facts for kids 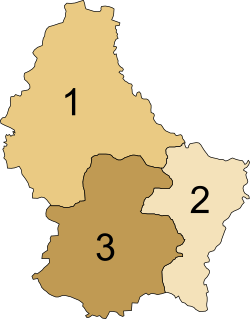 The districts (and cantons) were created on 24 February 1843. In 1857, the Mersch district was created from the cantons of Mersch and Redange. However, this fourth district was abolished in 1867.

In October 2015, the districts were abolished.

All content from Kiddle encyclopedia articles (including the article images and facts) can be freely used under Attribution-ShareAlike license, unless stated otherwise. Cite this article:
Districts of Luxembourg Facts for Kids. Kiddle Encyclopedia.