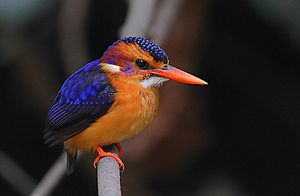 African pygmy kingfisher, showing coloration shared by all adults of that species to a high degree of fidelity.

Speciation is about how species form. It is a major part of evolutionary biology.

Darwin thought most species arose directly from pre-existing species. This is called anagenesis: species by changing, or 'phyletic evolution'. Now we think most species arise by previous species splitting: cladogenesis.

The general view is that most species splitting is caused or helped on its way by isolating mechanisms.

Isolating mechanisms are things which prevent successful breeding between groups in a species. Reproductive isolation of populations is established. This is particularly important to the biological species concept, as species are defined by reproductive isolation.

Isolating mechanisms can be divided into two groups, before and after fertilisation.

Factors which prevent individuals from mating.

Factors which prevent mating being successful, such as genetic incompatibility, hybrid inviability or sterility.

This is thought to be the most comon cause of speciation. The first person to think of it was Moritz Wagner, a German explorer and natural historian.

Wagner's early career was as a geographer, and he published a number of geographical books about North Africa, the Middle East, and Tropical America. He was also a keen naturalist and collector, and it is for this work he is best known among biologists. Ernst Mayr, the evolutionist and historian of biology, has given an account of Wagner's significance.p562–565

During his three years in Algeria, Wagner (amongst other activities) studied the flightless beetles Pimelia and Melasoma. Each genus is split into a number of species, each of which is confined to a stretch of the north coast between rivers which descend from the Atlas Mountains to the Mediterranean. As soon as one crosses a river, a different but closely related species appears.

"... an incipient species will only [arise] when a few individuals transgress the limiting borders of their range... the formation of a new race will never succeed... without a long continued separation of the colonists from the other members of their species".

Volcanic islands are formed with no life, and all life has to arrive carried by wind or water. We know from the Hawaiian islands and from the Galapagos Islands that all forms of life change when they reach the islands from the mainland.

Studies show a clear "flow" of species from older to newer islands. There are also cases of colonization back to older islands, and skipping of islands, but these are much less frequent.

By potassium/argon radioactive dating, the present islands date from 0.4 million years ago (mya) (Mauna Kea) to 10mya (Necker). The oldest member of the Hawaiian archipelago still above the sea is Kure Atoll, which can be dated to 30 mya. 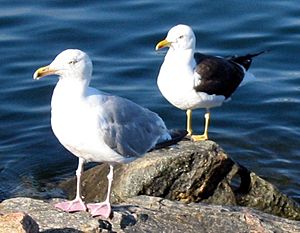 The archipelago itself, produced by the Pacific plate moving over a hot spot, has existed for far longer, at least into the Cretaceous. The Hawaiian islands plus former islands which are now beneath the sea make up the Hawaiian–Emperor seamount chain; and many of the underwater mountains are guyots. 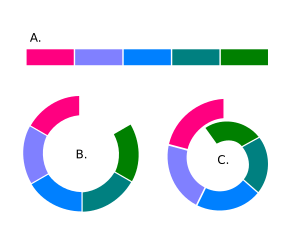 In this diagram, interbreeding populations are represented by coloured blocks. Variation along a cline may bend right around, forming a ring.

In biology, a ring species is a connected series of neighboring populations, each of which can interbreed with next-door populations. The two ends of the chain overlap.

The two end populations in the series are too distantly related to interbreed. Such non-breeding-though-genetically-connected 'end' populations may co-exist in the same region, thus closing a 'ring'.

Ring species provide important evidence of evolution: they illustrate what happens over time as populations genetically diverge. Richard Dawkins observed that ring species "are only showing us in the spatial dimension something that must always happen in the time dimension". 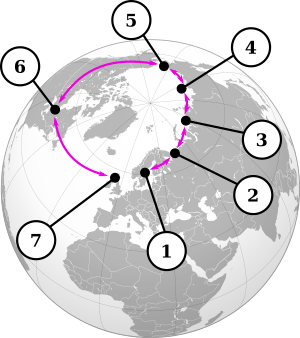 However, it is difficult to find a simple, straightforward example.

A classic example of ring species is the Larus gulls' circumpolar species ring. The range of these gulls forms a ring around the North Pole, which is not normally flown over by individual gulls.

Broadly speaking, the gulls can interbreed to some extent with their neighbours, except at the two ends of the ring.

The Lesser Black-backed Gulls and Herring Gulls are sufficiently different that they do not normally hybridize; thus the group of gulls forms a continuum except where the two lineages meet in Europe.

Although the reality is much more complicated, it shows the general idea well. 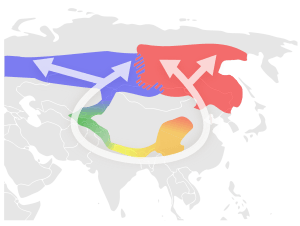 The Ensatina salamander is a ring species in the mountains around the Californian Central Valley. The complex forms a horseshoe shape around the mountains. Though interbreeding can happen between each of the 19 populations around the horseshoe, the Ensatina eschscholtzii subspecies on the western end of the horseshoe cannot interbreed with the Ensatina klauberi on the eastern end. It is an illustration of "nearly all stages in a speciation process" (Dobzhansky). Richard Highton argued that Ensatina is a case of multiple species and not a continuum of one species.

The Greenish Warbler (Phylloscopus trochiloides) has a number of subspecies, of which P. t . viridianus is the most familiar in Europe. It is a ring species with populations diverging east and westwards of the Tibetan Plateau, later meeting on the northern side. Their relationships are fairly confusing.

Sympatric speciation refers to the formation of two or more descendant species from a single ancestral species all occupying the same geographic location.

However, not all polyploids are reproductively isolated from their parental plants, and gene flow may still occur for example through triploid hybrid x diploid matings that produce tetraploids.

Many of the existing plant and most animal species have apparently undergone polyploidization in their evolutionary history. Reproduction of successful polyploid species is sometimes asexual, by parthenogenesis. For unknown reasons many asexual organisms are polyploid.

One example of evolution at work is the case of the hawthorn fly, Rhagoletis pomonella, which appears to be undergoing sympatric speciation.

Some evidence suggests that sympatric speciation is occurring. Hawthorn flies mature later in the season and take longer to mature than apple flies; and there is little evidence of interbreeding (researchers have documented a 4-6% hybridization rate).

The emergence of the new hawthorn fly is an example of evolution in progress.

Rarely, a new species forms when individual members of different species mate. Usually, the products of such hybrid matings are infertile (not fertile), or relatively so, and so get eliminated by natural selection.

One example of a new and successful hybrid species has been found. The new species is a hybrid of the Italian and Spanish sparrows, and the basic facts have been checked by sequence analysis from the DNA in their blood. The bird lives in Italy in a region where both parent species live. It does not reproduce with the Spanish sparrow even though it lives with them side-by-side.

New species have been created by domesticated animal husbandry, but the initial dates and methods are not clear. For example, domestic sheep were created by hybridisation, and no longer produce viable offspring with Ovis orientalis, one species from which they are descended.

Domestic cattle, on the other hand, can be considered the same species as several varieties of wild ox, gaur, yak, etc., as they readily produce fertile offspring with them.

The best-documented creations of new species in the laboratory were performed in the late 1980s. William Rice and G.W. Salt bred fruit flies, Drosophila melanogaster, using a maze with three different choices of habitat such as light/dark and wet/dry.

Each generation was placed into the maze, and the groups of flies that came out of two of the eight exits were set apart to breed with each other in their respective groups. After thirty-five generations, the two groups and their offspring were isolated reproductively because of their strong habitat preferences: they mated only within the areas they preferred, and so did not mate with flies that preferred the other areas. The history of such attempts is described in Rice and Hostert (1993).

Diane Dodd was also able to show how reproductive isolation can develop from mating preferences in Drosophila pseudoobscura after only eight generations using different food types, starch and maltose.

Dodd's experiment has been easy for many others to replicate, including with other kinds of fruit flies and foods.

Reinforcement is the process by which natural selection increases reproductive isolation.

It may occur after two populations of the same species are separated and then come back into contact. If their reproductive isolation was complete, then they will have already developed into two separate incompatible species.

If their reproductive isolation is incomplete, then further mating between the populations will produce hybrids, which may or may not be fertile. If the hybrids are infertile, or fertile but less fit than their ancestors, then there will be no further reproductive isolation and speciation has essentially occurred (e.g., as in horses and donkeys.)

The reasoning behind this is that if the parents of the hybrid offspring each have naturally selected traits for their own different environments, the hybrid offspring will bear traits from both, and would not fit either niche as well as either parent. The low fitness of the hybrids would cause selection to favour assortative mating, which would reduce hybridization.

This is sometimes called the Wallace effect after the evolutionary biologist Alfred Russel Wallace who suggested in the late 19th century that it might be an important factor in speciation.

If the hybrid offspring are more fit than their ancestors, then the populations will merge back into the same species within the area they are in contact.

Reinforcement is required for separation when there is a "hybrid zone" between two forms of a species. Hybrid zones are regions where diverged populations meet and interbreed. Hybrid offspring are very common in these regions, which are usually created by diverged species coming into secondary contact.

Without reinforcement the two populations or species would have uncontrollable interbreeding. Reinforcement may be induced in artificial selection experiments as described above.

All content from Kiddle encyclopedia articles (including the article images and facts) can be freely used under Attribution-ShareAlike license, unless stated otherwise. Cite this article:
Speciation Facts for Kids. Kiddle Encyclopedia.