Division of Lowe facts for kids 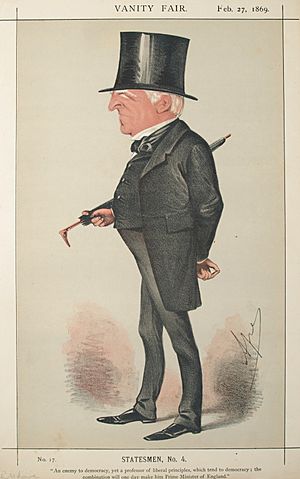 The Division of Lowe was a Federal Electoral Division for the Australian House of Representatives in the state of New South Wales. It was located in the inner western suburbs of Sydney, on the south shore of the Parramatta River. It included the suburbs of Drummoyne, Five Dock, Croydon, Croydon Park, Burwood, Enfield, Homebush, Strathfield, Concord, Rhodes, Canada Bay, Cabarita, Abbotsford and Mortlake.

The Division was named after the Rt Hon Robert Lowe, 1st Viscount Sherbrooke. Lowe had been a Member of the New South Wales Legislative Council, and former Home Secretary of the United Kingdom. The Division was created in 11 May 1949, for the 1949 federal election. It was first held by Sir William McMahon, who held the seat for over 32 years, until 1982. He was Prime Minister 1971-72.

In 2009 the seat of Lowe was abolished. Most of the area was added to the nearby Division of Reid.

There was a by-election in Lowe in 1982 after Sir William McMahon resigned from the parliament.

All content from Kiddle encyclopedia articles (including the article images and facts) can be freely used under Attribution-ShareAlike license, unless stated otherwise. Cite this article:
Division of Lowe Facts for Kids. Kiddle Encyclopedia.