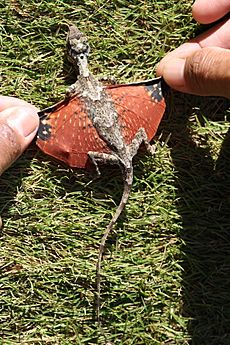 Draco is a genus of agamid lizards that are sometimes called the flying dragons. The ribs and their connecting membrane can be extended to create a kind of wing. The hindlimbs are flattened and wing-like in cross-section, and a small set of flaps on the neck serve as a horizontal stabilizers.

They live in forests, and eat insects. They cannot fly, but often get lift as they glide. Glides as long as 60 m have been recorded, over which the animal loses only 10 m in height. They are quite small. One species is only about 20 cm long.

The only time a flying lizard comes to the ground is when a female is ready to lay her eggs. She descends the tree she is on and makes a nest hole by forcing her head into the soil. She then lays 2–5 eggs before filling the hole. She guards the eggs for approximately 24 hours, but then leaves and has nothing more to do with her offspring.

There are about 42 species. 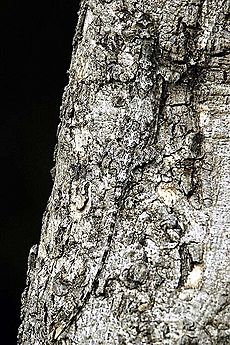 All content from Kiddle encyclopedia articles (including the article images and facts) can be freely used under Attribution-ShareAlike license, unless stated otherwise. Cite this article:
Draco (genus) Facts for Kids. Kiddle Encyclopedia.