Dresden is a village in Jefferson and Cass townships in Muskingum County, Ohio, United States, along the Muskingum River at the mouth of Wakatomika Creek. It was incorporated on March 9, 1835. The population was 1,529 at the 2010 census.

Dresden is located on or near the site of a Shawnee (Native American) village known as Wakatomika, which gave its name to Wakatomika Creek, the creek that empties into the Muskingum River near the northern edge of the village. These were the easternmost of the Shawnee villages, and the home of the most hostile of that tribe. David Zeisberger, the Moravian missionary, preached there in 1773 in an effort to convert them; but the wrongs done to Chief Logan and other Ohio Native Americans were discussed at this place with much rancor, and war parties had been going out from here against the white settlers in spite of attempts by the Delaware (tribe) to intercede. On August 7, 1774, Colonel Angus McDonald brought 400 men from Fort Pittsburg in the Wakatomica Campaign of Lord Dunmore's War to fight the Shawnee. The settlement of Wakatomika, as well as four other villages, was burned to the ground and three chiefs were taken prisoner.

Seth Adams of Boston also settled the area in 1799 and is said to have cultivated the first tomatoes in the county from seed he got from New Orleans. He was also one of the first to plant apple trees and helped to introduce full blooded Merino sheep to the United States. He also built one of the first houses in Dresden.

Mordecai Ogle settled on a farm about half a mile northeast of Dresden in 1802.

In 1804, Seth Adams had a "corn-cracker" mill on Wakatomika Creek. 1804 also saw Isaac Cordray, his son, George Cordray; and George Dowell settle in the area.

An election was held in April 1805 to elect officers for Jefferson Township in the home of Henry Northrup. Seth Carhart, Valentine Johnson and Isaac Cordray were elected as trustees. John Wamsley and James Sprague were elected "Overseers of the poor". James Wilcox and William Elben were elected as Township Fence Viewer. Peter Reasoner and Jacob Jackson were elected "listers and appraisers". Henry Northrup and James Tanner were elected "supervisors of highways". At this same time, John Cain was Township Clerk. Since he wasn't elected in this election, it is reasonable to assume there was at least one election held prior to this one in 1805.

Wyllys Silliman, the son-in-law of Major Jonathan Cass, operated a saw mill and grist mill on Wakatomika Creek in 1806. The dam for this mill washed away in 1832 and was never rebuilt. He also manufactured salt near his mills.

Also, on 15 Feb 1806, Isaac Cordray was elected Justice of the Peace, to fill the vacancy left by the death of Seth Carhart. On 1 Apr 1809, Joseph Scott was elected to the office without opposition.

In 1812, Seth Adams, who is thought to have been a partner or an agent of David Humphreys, was known to have kept and sold imported pure-blooded Merino sheep from Spain in, or near, Dresden. He is also credited with planting the first tomatoes in the area with seeds he obtained from New Orleans.

Also in 1812 Otho Miller and Jacob Houser were the first blacksmiths and Judge Stillwell was operating a ferry.

In 1815, Joseph F. Monroe operated a distillery on his farm about four miles above Dresden on the Muskingum. He was among the first to plant peach and apple trees. He discontinued his distillery after the Ohio canal was finished.

The town of Dresden was laid out in 1817. This was also the year that the first merchant, Laban Lemert, opened for business out of a log house.

A year later, in 1818, John Cordray began running a tavern out of a log cabin, on the site later occupied by the Akeroyd House. A few years later Abraham Smith took over the running of this establishment. Mr. Smith was to later teach school. At this time Peter D. Reasoner was also running a tannery and a weaver from Maryland, by the name of Morgan Morgan, had set up shop as well.

1818 saw the arrival of Joseph Bryant and Daniel Stillwell.

Around 1819 the first physician, Benjamin Webb, came to the township. His son, Nathan later succeeded him in the business

Simeon and Leonard Wilson came in 1820.

In 1821 Drs. Nathan Webb, senior and junior, established the first castor oil mill west of the Allegheny Mountains in Dresden, but they did not stay in the area long.

In 1822 Laban Lemert expanded into the distillery business.

1822 also saw the beginning of the construction of the main line of the Ohio Canal in Jefferson Township, which was completed in 1829. The Dresden side-cut was ready for use in 1831.

In 1825, the first Presbyterian services were held in Dresden, occasionally in private houses, but usually in a log schoolhouse on the site of the Union school building.

By 1833 Henry and Benjamin Roop, of Buffalo, New York decided to compete with Laban Lemert with their own distillery and became extensive distillers.

In 1835 a brick building was erected on Main Street to house the Methodist Episcopal church. In 1852 it was replaced by a larger building at a cost of $3000.00.

8 Mar 1835 was the date of Dresden's incorporation.

14 May 1836 Laban Lemert, G. W. Cass, William W. Bice, T. M. Barrow and Dr. A. H. Brown were appointed to a building committee to build the Presbyterian church. They building was actually started in the latter part of the year and finished in the spring of 1838. The building cost $1500.00. In May 1852 the church got their first pipe organ. The building that currently houses the church on Chestnut Street was dedicated on 29 February 1880.

On 30 July 1838 A. Deffenbaugh published the first issue of the town newspaper, Dresden Chronicle. The newspaper was published under that name until 1842 when its name was changed to Journal. The Journal ceased publication in 1844.

The first meetings of the Baptist church were held in 1840 in the old Market house until the frame church was built 1845-6. 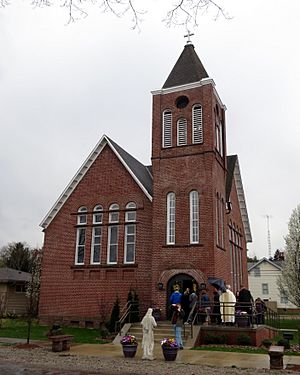 Starting in 1843, Father Gallinger held monthly services for the Roman Catholic Church in the home of G. A. Peffer. A frame church was built in 1847 and a brick one in 1890.

In 1848, John W. Wallace published a single edition of a newspaper called the Visitor. There wouldn't be another newspaper in Dresden until Wallace and Agnew produced the Advocate in 1850, which had a run of about 2 years. At that time a man by name of Mr. Sygford took over the paper and changed the name to The Intelligencer.

1848 also was the year a telegraph line from Zanesville to Wooster passed through Dresden and a telegraph office was opened. The office closed several years before Western Union opened its office in 1868.

In 1852, together with several other prominent citizens, George Willison Adams formed a stock company to build the third suspension bridge in the United States across the Muskingum river near Dresden. When the other members of the company became fearful that the plan was not feasible and that they would lose their money, Adams built the bridge at his own expense, his nephew, George Copeland, was the bridge's engineer. It was 1000 feet in length, cost $30,000.00 and was made from materials manufactured in Dresden. The bridge was run as a toll bridge for several years before Adams eventually sold the bridge to the county commissioners for one-third of the original building cost of the bridge. The bridge was eventually destroyed in the Great Flood of 1913.

1852 also saw a small congregation of 24 people organized for the German Methodist Episcopal church. Services were held, first in the Market house and, later, in 1858, a frame church was built. 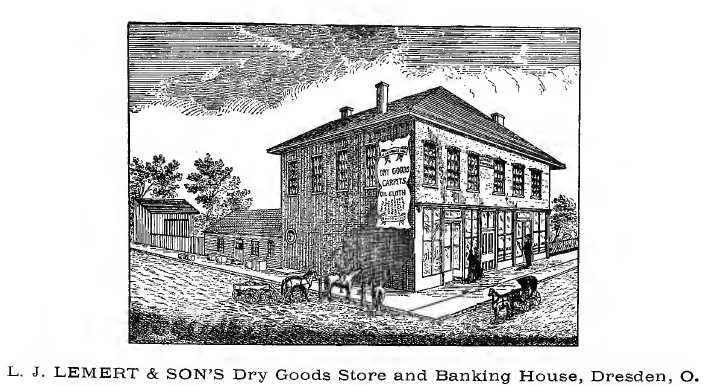 In 1855 Bently took over ownership of The Intelligencer who, in turn sold the paper to M. B. Lovett who suspended publication around 1877.

In 1866 G. Eaton established the second bank in Dresden.

Meanwhile, in 1868, T. W. Peacock and son started a second newspaper in the town called the Dresden Monitor, which they sold to J. A. Jackson a year later. Ownership of the Dresden Monitor then passed through the hands of L. M. Murphy, W. H. Conklin and J. T. Shryock successively. Shryock ran the paper successfully for two years before selling the paper to John W. Martin, who changed its name to Herald and continued publishing it for another six months.

In 1874 James W. Wheeling established a newspaper called Dresden Doings which he published bi-weekly. In September 1878 Wheeling sold his paper to W. E. Smith. Smith began publishing the paper weekly and continued publishing the Doings until 1879 when it became The Dresden Transcript. The Transcript is still being published weekly as of January 2013.

The early spring of 1901 saw the beginning of construction of the Dresden telephone exchange. The first subscribers were connected by November 1901.

Dresden is the birthplace of the Longaberger Company, famous for handmade maple splint baskets. Started in 1919 by the J.W. Longaberger family, the company today employs nearly 2,000 people as the largest manufacturer of handmade baskets in the United States. It is home of "The World's Largest Basket", according to the Guinness Book of World Records.

There were 651 households, of which 27.8% had children under the age of 18 living with them, 44.2% were married couples living together, 15.5% had a female householder with no husband present, and 35.0% were non-families. 30.4% of all households were made up of individuals, and 12.3% had someone living alone who was 65 years of age or older. The average household size was 2.35 and the average family size was 2.88.

Dresden has the following historic structures of note:

This article incorporates public domain material from websites or documents of the United States Government.

Dresden is located in the Tri-Valley Local School District, and is home to Dresden Elementary School, Tri-Valley Middle School, and Tri-Valley High School.

Dresden is served by a branch of the Muskingum County Library System.

All content from Kiddle encyclopedia articles (including the article images and facts) can be freely used under Attribution-ShareAlike license, unless stated otherwise. Cite this article:
Dresden, Ohio Facts for Kids. Kiddle Encyclopedia.