Dunwich is a village and civil parish in Suffolk, England. It is located in the Suffolk Coast and Heaths AONB around 92 miles (148 km) north-east of London, 9 miles (14 km) south of Southwold and 7 miles (11 km) north of Leiston, on the North Sea coast.

In the Anglo-Saxon period, Dunwich was the capital of the Kingdom of the East Angles but the harbour and most of the town have since disappeared due to coastal erosion. At its height it was an international port similar in size to 14th century London. Its decline began in 1286 when a storm surge hit the East Anglian coast followed by a great storm in 1287 and another great storm also in 1287, and it was eventually reduced in size to the village it is today. Dunwich is possibly connected with the lost Anglo-Saxon placename Dommoc.

The population of the civil parish at the 2001 census was 84, which increased to 183 according to the 2011 Census, however the area used by the Office of National Statistics for 2011 also includes part of the civil parish of Westleton. There is no parish council, instead there is a parish meeting. 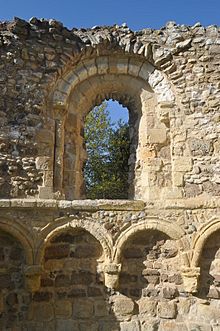 Since the 15th century, Dunwich has frequently been identified with Dommoc – the original seat of the Anglo-Saxon bishops of the Kingdom of East Anglia established by Sigeberht of East Anglia for Saint Felix in c. 629–31. Dommoc was the seat of the bishops of Dommoc until around 870, when the East Anglian kingdom was taken over by the initially pagan Danes. Years later, antiquarians would even describe Dunwich as being the "former capital of East Anglia". However, many historians now prefer to locate Dommoc at Walton Castle, which was the site of a Saxon shore fort.

The Domesday Book of 1086 describes it as possessing three churches. At this time it had an estimated population of 3000.

On 1 January 1286, a storm surge reached the east edge of the town and destroyed buildings in it. Before that, most recorded damage to Dunwich was loss of land and damage to the harbour.

This was followed by two further surges the next year, the South England flood of February 1287 and St. Lucia's flood in December. A fierce storm in 1328 also swept away the entire village of Newton, a few miles up the coast. Another large storm in 1347 swept some 400 houses into the sea. The Grote Mandrenke around 16 January 1362 finally destroyed much of the remainder of the town. 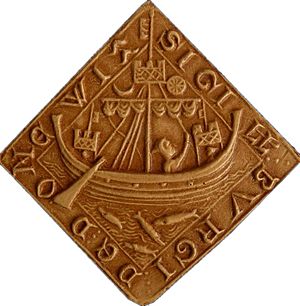 Most of the buildings that were present in the 13th century have disappeared, including all eight churches, and Dunwich is now a small coastal "village", though retaining its status as a town. The remains of a 13th-century Franciscan priory (Greyfriars) and the Leper Hospital of St James can still be seen. A popular local legend says that, at certain tides, church bells can still be heard from beneath the waves.

The loss of "a busy port to ... 14th century storms that swept whole parishes into the sea" is an urban myth. It appears that the port developed as a sheltered harbour where the Dunwich River entered the North Sea. Coastal processes including storms caused the river to shift its exit 2.5 miles (4 km) north to Walberswick, at the River Blyth. The town of Dunwich lost its raison d'etre and was largely abandoned. Sea defences were not maintained and coastal erosion progressively invaded the town.

As a legacy of its previous significance, the parliamentary constituency of Dunwich retained the right to send two members to Parliament until the Reform Act 1832 and was one of Britain's most notorious rotten boroughs.

By the mid-19th century, the population had dwindled to 237 inhabitants and Dunwich was described as a "decayed and disfranchised borough". A new church, St James, was built in 1832, after the last of the old churches, All Saints', which had been without a rector since 1755, was abandoned. All Saints' Church fell into the sea between 1904 and 1919, the last major portion of the tower succumbing on 12 November 1919. In 2005 historian Stuart Bacon stated that recent low tides had shown that shipbuilding had previously occurred in the town.

The Dark Heart of Dunwich is piece of a Suffolk folklore, the origins of which appear to lie in the 12th century. The legend tells of how Eva, a Dunwich maiden due to be married to the son of a local landowner, fell instead for a good-looking local cad, who had his way with her and then deserted her, running off to sea. After waiting in vain for her lost love to return, she cut out her heart and hurled it into the sea. However, according to the legend, she was unable to die, and still haunts the area, particularly around the (constantly shifting) beach. The heart itself, believed to be similar in appearance to a wooden heart, is believed to wash up occasionally, and bring great misfortune onto anyone who picks it up and keeps it. 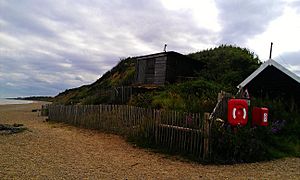 The Dunwich 2008 project funded by English Heritage and the Esmée Fairbairn Foundation was intended to collate all reliable historic mapped data on the same co-ordinate system and combine this with aerial photography and an underwater survey. New digital maps were produced by Prof. David Sear of Southampton University, marine archaeologist Stuart Bacon and the Geodata Institute. The survey also used multibeam and sidescan sonar to map the seafloor across the entire area of the town. These surveys identified a series of ruins which were confirmed by divers who recovered stones with lime mortar still attached. The lime mortar matched nearly perfectly with medieval mortar in existing churches on the coast. In 2009 Wessex Archaeology working with Professor Sear, captured the highest resolution sidescan images of the town site including the ruins found in 2008. Further work in 2010 with BBC Oceans and the BBC One Show used novel acoustic imaging cameras (DIDSON) to film the ruins through the turbid water. These clearly showed the jumble of ruined blocks and worked stone associated with medieval church and chapel sites. A large survey and updating of the mapped data was commissioned by English Heritage in 2011 and reported in 2012. This compiled all previous survey data and enhanced the historical map and coastal pilot charts for the site. The results have produced the most comprehensive survey of the Dunwich town site – the largest medieval underwater site in Europe. Data from these surveys including maps and images explaining the different technologies are displayed in Dunwich Museum which is accredited by the Museum Archives Libraries Council. Details of Dunwich's 800-year battle to protect against coastal erosion are also displayed in the museum and it is hoped more work will be done in future. A database of references to Dunwich "designed to aid academic researchers, family historians and students" is available online.

In June 2011, at the invitation of Prof David Sear and the Dunwich Town Trust the Anglo-Saxon and medieval archaeology of Dunwich was the subject of an episode of archaeological television programme Time Team.

Further work to explore new sites using DIDSON and diver surveys and a campaign of land based archaeology is scheduled for 2013–15 funded by the "Touching the Tide" Heritage Lottery Fund Landscape Partnership Scheme. This work hopes to confirm the date of the town ditches and roads and explore the record of environmental change in the marsh sediments. Altogether this work has identified the ruins of St Peter's and St Nicholas's churches, a chapel most probably St Katherine's, and ruins associated with Blackfriars friary and the town hall. The location of the Knight's Templar Church and All Saints' Church are known from the digital mapping but remain buried beneath an inner sandbank. The early town is buried under between 1 and 3 metres (9.8 ft) of sand to the east of the ruins found by Bacon and these later surveys. As a result, it was found that Dunwich had been a substantial port in Saxon times.

Churches and other notable structures 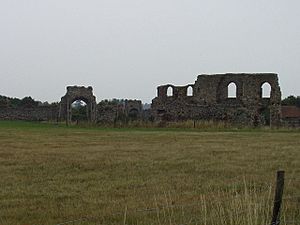 Ruins of All Saints' Church in Dunwich, here in a postcard of 1904

All content from Kiddle encyclopedia articles (including the article images and facts) can be freely used under Attribution-ShareAlike license, unless stated otherwise. Cite this article:
Dunwich Facts for Kids. Kiddle Encyclopedia.