Economy of Arkansas facts for kids

The economy of Arkansas produced US$119 billion of gross domestic product in 2015. Six Fortune 500 companies are based in Arkansas, including the world's #1 corporation, Walmart. Arkansas's per capita income for 2010 was $36,027. The three-year median household income from 2009-11 was $39,806, ranking forty-ninth in the nation.

The state's 2011 exports totaled $5.6 billion. Civilian aircraft was the primary export from Arkansas in 2011 in terms of market share, worth approximately half a billion dollars. Poultry, cotton, rice, graders, ammunition, organic chemicals, steel, and shock absorbers are also important exports from Arkansas. Dassault Falcon Jet Corporation in Little Rock is one of the largest foreign-owned corporations in Arkansas.

The state also ranks third in terms of channel catfish aquaculture, with about 19,200 acres (78 km2) under catfish farming in 2010. The peak of catfish farming in the state was in the year 2002, when 38,000 acres (150 km2) were under farming. In 2007, the state’s catfish producers generated sales of $71.5 million – 16 percent of the total U.S. market. Arkansas was the first state to develop commercial catfish farms in the late 1950s. The number of catfish farms in the state grew through the 1990s as farmers entered the catfish business as a way to provide additional income during a time of low prices for cotton and soybeans. 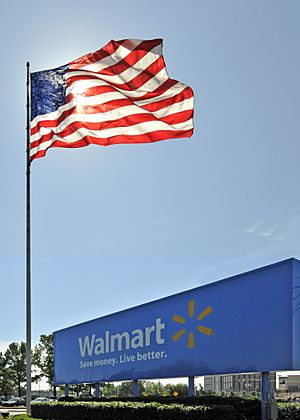 The following table lists the public companies headquartered in Arkansas with 2012 revenues placing them in the 500 largest U.S. companies.

The following table lists the only privately held companies headquartered in Arkansas with 2011 revenues over $1 billion. 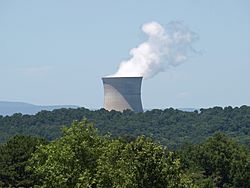 The nuclear reactors at Arkansas Nuclear One in Russellville provide the state with electricity. 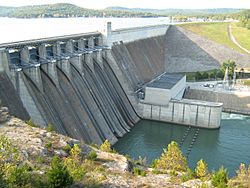 Beaver Dam in Carroll County is capable of producing 340 megawatts (460,000 hp) of energy at capacity.

Arkansas produced 588,700,000,000,000 British thermal units (1.725×1011 kWh) in 2007, mostly from coal, petroleum, nuclear, and renewable energy sources. In 2007, 46.2% of Arkansas's energy production was from natural gas, 27.6% from nuclear power, 19.9% from renewable sources, 6.2% from fossil fuels. Arkansas imports petroleum for use in the transportation sector but is a net exporter of electric power, selling 20,400,000,000,000 British thermal units (6.0×109 kWh) to the national electric grid in 2007. The rural nature of Arkansas causes Arkansans to spend more on energy than the national average. Due to transmission, 65% of electricity was lost on its way to consumers in 2007. The state's low population density results in higher electricity costs and more gallons of fuel used per vehicle. Arkansas consumes more natural gas and renewable energy and less fossil fuels than the national average.

Petroleum production in Arkansas began with a boom in the early 1920s in southern Arkansas. Largely produced by Union, Lafayette, Columbia, and Ouachita counties, the boom began when the Busey Well No. 1 was completed on January 10, 1921. The region, especially El Dorado and Smackover, oil production exploded into a large part of the Arkansas economy. Today, petroleum is a minor piece of the state economy, yet the industry remains one of the largest employers in the region. Today, remnants of the oil boom include Murphy Oil, a gasoline retailer and Arkansas Museum of Natural Resources, which informs visitors of the history of oil in the area. Two refineries, the El Dorado Refinery and the Smackover Refinery produce a combined 76,800 bbl/d (12,210 m3/d).

Natural gas has become an important source of energy and economic activity in north central Arkansas. Hydraulic fracturing in the Fayetteville Shale has impacted much of the region's economy, including Cleburne, Conway, Faulkner, Van Buren, and White counties. The state ranked 12th in terms of marketed production of natural gas in 2007. However, health and environmental concerns, including the possible responsibility for earthquakes called the Guy-Greenbrier earthquake swarm have slowed the continued development of activity in the region.

Although accounting for a small portion of Arkansas's energy production mixture, coal reserves are being mined in the state. Coal is mostly located in the Arkansas River Valley in western Arkansas. The state has significant lignite deposits as well. Arkansas coal has very low sulfur content compared to national averages.

Renewable energy plays an important role in Arkansas's energy production and consumption cycle. The state's energy mix included 10% renewables, compared to a national average of 5.7%, in 2007. Hydroelectric power is the state's largest source of renewable energy. Dams such as Beaver, Bull Shoals, Greers Ferry, and Dardanelle Lock and Dam all have capability of producing hydroelectric power. Although Arkansas ranks 27th nationally in wind energy potential, the state has few wind turbines installed. However, the world's largest turbine blade manufacturer, LM Wind Power and Nordex, a turbine component company have both added facilities in the state.

All content from Kiddle encyclopedia articles (including the article images and facts) can be freely used under Attribution-ShareAlike license, unless stated otherwise. Cite this article:
Economy of Arkansas Facts for Kids. Kiddle Encyclopedia.