The name Eight Mile Plains was given early in its settlement, and refers to the area's flat topography and the distance (8 miles (13 km)) to One Mile Swamp (now Woolloongabba).

Eight Mile Plains was one of Brisbane's suburbs first to be settled.

In October 2014 a petition was made by 380 residents to excise the north-eastern part of Eight Miles Plains bounded by the Pacific Motorway and Bulimba Creek to create a new suburb to be called Wishart Outlook, the name given to the area by its developers in the 1990s. However, other residents are opposed to the change.

The name of the Aboriginal clan formerly occupying this area is uncertain. According to one source they are likely to have been the Chepara clan of Eight Mile Plains who spoke Turrbal. The Yerongpan of Oxley Creek who are said to have claimed the area from Brisbane to Ipswich. Another source claims they were the Yagarabal, who ranged from Brisbane to the Logan River and west to Moggill Creek. The Aborigines used a trail which later became Logan Road. This trail bisected many creeks including the Mimosa Creek and Bulimba Creek watercourse. Eight Mile Plains has two primary schools: Eight Mile Plains State School and Warrigal Road State School, which sits off Warrigal Road which is one of Eight Mile Plains's and Runcorn's main road. The term "Warrigal" actually means "Dingo" in the local Aboriginal language.

The name of Eight Mile Plains is linked to the early days of settlement. It refers to the area's topography as well as the distance (eight miles) by bush track to One Mile (1.6 km) Swamp (now Woolloongabba). In 1861, over 7,800 acres (32 km2) in the nearby Coopers Plains area had been proclaimed the Brisbane Agricultural Reserve. In 1864 this was extended by a further 5,500 acres (22 km2) and the Eight Mile Plains Agricultural Reserve was formed. It comprised the current suburbs of Sunnybank, Sunnybank Hills, Runcorn, Kuraby, Eight Mile Plains and parts of Coopers Plains, Algester and Stretton. Electricity was extended to the district in 1936 and in 1958 a new school was constructed to service the area.

Eight Mile Plains has a number of heritage-listed sites, including: 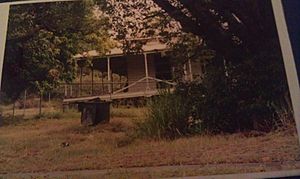 Hughesville is the heritage-listed residence located on the corner of Logan and Padstow Road. The timber single-storied home was erected in 1892–93 by Alfred (Fred) Hughes (a local horse dealer) on land owned by Richard Hughes and reputedly given to this son, Richard, as a wedding gift when he married Elizabeth Magee in 1891. Hughesville survives as illustration of a past way of life, and of a particular residential type - the quintessential Queensland house of the late colonial period. It is significant for its intactness, cohesive character, aesthetic appeal and landmark position. The house has a strong community association, being for many years a principal landmark along the old Pacific Highway to the Gold Coast, demarcating the outskirts of Brisbane. In the late 1990s, it was used in one of the beer advertisements in QLD. The land has now been subdivided and a few townhouses have been built behind the house. The house itself has been converted into a business establishment. In 2007 the recently renovated Hughesville was bought and became the southside home of Bennett Carroll solicitors. The firm, which has been in the area for over 35 years, has long sought to have the landmark as its headquarters. It is currently up for sale again.

Hughesville was listed on the Queensland Heritage Register in 1992.

The Brisbane Technology Park (BTP) is an initiative of the Queensland Government developed to provide a catalytic environment for established and emerging knowledge-intensive, technology-based companies. Opened in 1986, the park is located on a 33.5-hectare (83-acre) site that is only 12 minutes from the Brisbane CBD. The Queensland Clunies Ross Centre for Science and Industry opened at the Technology Park in 1997.

Dominant natural features of the area include Bulimba Creek. Before white settlement the area was home to a diverse range of plants and animals. There are also areas of remnant bushland in the suburb and a small number of market gardens.

All content from Kiddle encyclopedia articles (including the article images and facts) can be freely used under Attribution-ShareAlike license, unless stated otherwise. Cite this article:
Eight Mile Plains, Queensland Facts for Kids. Kiddle Encyclopedia.