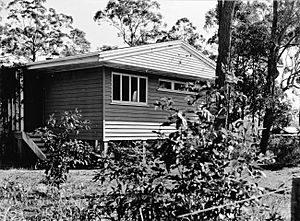 Kuraby is an outer southern suburb in the City of Brisbane, Queensland, Australia. In the 2016 census, Kuraby had a population of 8,108 people.

The climate is sub-tropical with relatively dry winters and hot humid summers. In practice one could throw a stick of wood into a creek one side of the suburb and eventually it would finish up in the Brisbane River whilst if one throws a stick in the opposite direction it would finish up in the Logan River. Both rivers eventually flow into Moreton Bay. Because Kuraby is situated between these two rivers it tends to have a somewhat dryer landscape than other parts of Brisbane. Rain tends to come up the Logan to the mountains [hills] behind Brisbane then back down the Brisbane River. The topography ranges from high hills with very poor soil to low, very fertile soil areas.

A number of parks are situated within the area these cater for all types of activities from sporting to leisure. The local council has reserved large tracts of native bush in the area surrounding many of these parks. This in turn has ensured that many of the wildlife species of the area survives.

Kuraby State School was opened in 1928 and is situated within bushland surrounds.

Kuraby Special School opened in 1978 and caters for students from Prep to Year twelve.

The name "Kuraby" was officially gazetted on 16 August 1975 and derives from the local railway station name first used by the Railway Department in 1889. Originally the name came from an aboriginal word meaning “a place of many springs.”

The area of Kuraby was once known as Eight Miles Plains. Charles Baker was granted a Publican’s Licence on 12 December 1865. The modern Glen Hotel now stands there. This was where Cobb & Co changed horses and the passengers were refreshed before continuing their journey to Beenleigh and further south.

It wasn’t until the railway established the “southern” rail line in 1885 and a rail station that people said that they came from Kuraby. This was to differentiate the area from Eight Mile Planes or Spring Creek as the local (Kuraby) settlers called the area. The settlement of Kuraby began in 1860, when the Hollosons and Bakers cleared land and commenced farming. This until recently has been the areas main activity. Today the main activity is developing the fertile land into housing estates hence there is very little evidence of what was once the areas main activity, agriculture.

The Duke and Duchess of York opened the new Parliament House, Canberra, in 1927. Four years later they toured Australia, and in the middle of their hectic schedule, one night’s rest was arranged. The Royal Train was brought to the passing loop at Kuraby station and kept securely there with its pilot train. The timetable was re-arranged to enable them to have an un-interrupted evening. This event put the name of Kuraby on the map.

The median age of the Kuraby population was 33 years of age, 4 years below the Australian median.

Kuraby has a diverse population mix of old and young. Some of the older residents can trace their families back to the early settlement of the area. A number of the local streets now bear their name.

Many nationalities from different parts of the world now call Kuraby home. The Muslim community has a mosque in Kuraby while there is a Buddhist temple situated in a nearby suburb. Many other religions have their place of worship either in the suburb or in the surrounding suburbs. According to the 2016 census, Kuraby has the largest Muslim community of any suburb in Queensland, numbering 2,035 individuals and making up 25.1% of the suburb's population.

Young families are attracted to Kuraby as it has many facilities to cater for them. Several doctors and a chemist have set up business in Kuraby to cater for the health needs of the population. Kuraby has its own community centre (the infrastructure is owned by the local council) and is run by a volunteer committee of local people who are responsible for seeing that the building is maintained and improvements are implemented.

All content from Kiddle encyclopedia articles (including the article images and facts) can be freely used under Attribution-ShareAlike license, unless stated otherwise. Cite this article:
Kuraby, Queensland Facts for Kids. Kiddle Encyclopedia.