From 1802 to 1921, Eleutherian Mills was a gunpowder mill site used for the manufacture of explosives by the Du Pont family business, which was founded by Eleuthère Irénée du Pont. The name also refers to the house on the hill above the mills, which was the first Du Pont family home in America. In 1952, the site became an outdoor museum, and the Hagley Museum and Library was founded. The site was declared a National Historic Landmark in 1966.

The first domestic supplies of high-quality gunpowder were made in the US by E. I. du Pont de Nemours and Company. The company was founded in 1802 by E.I. du Pont, two years after he and his family left France to escape the French Revolution. 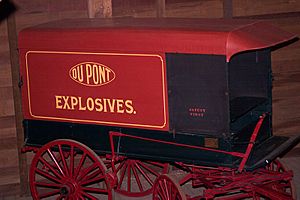 They set up the Eleutherian gunpowder mill on the Brandywine Creek just north of Wilmington, Delaware, based on gunpowder machinery bought from France and site plans for a gunpowder mill supplied by the French Government. They also built housing for 30 workers.

Starting, initially, by reworking damaged gunpowder and refining saltpetre for the US government, they quickly moved into gunpowder manufacture. Saltpetre was refined in an area between the house and the mills that now is occupied by a formal garden. Charcoal was produced from the willow trees that lined the Brandywine.

By the end of 1804, DuPont had sold 39,000 pounds of powder; the following year, sales tripled. The federal government and John Jacob Astor's American Fur Company became regular customers. In 1813, the Hagley property, just downstream from the original mills, was purchased, doubling the size and capacity of the mills. Sales grew during the Mexican–American War and the Crimean War. During the American Civil War, the firm sold 4,000,000 barrels of powder to the federal government.

Role of the DuPonts

Eleuthere Irenee Du Pont arrived at the site of Eleutherian Mills in the spring of 1802 to begin the construction of a black powder mill, barn, and a home for his family along the Brandywine Creek. His wife and three children joined him in July 1802, and by 1803, the residence was complete. Their home served as a center of business and social life at Eleutherian Mills for years to come. As E.I. DuPont travelled frequently for business affairs, his eldest son Albert Victor became responsible for managing the running of the mills in his absence. Members of the DuPont family ran the powder mills until its closing in 1921 and continue to hold leadership positions in the E.I. du Pont de Nemours and Company. Pierre S. du Pont (1870–1954), great great grandson of P.S. Du Pont, founded what is today Longwood Gardens. By 1813, E.I DuPont purchased a neighboring portion of land along the Brandywine River, then referred to Hagley Estate or Hagley Yard, to greater expand the company and build another site for powder mills.

Eleutherian Mills served as a home to the Du Pont family for generations, as well as, those who were employed by them. The early DuPont family consisted of E.I. DuPont, his wife Sophie, and their eight children, with extended family in New Jersey. The DuPont household also included those not related to the family, including enslaved individuals who followed the family as they settled in Delaware and indentured servants. Those in the household performed mainly domestic duties, and those employed after the end of slavery and indentured servitude, were often family members of those working in the powder mills. The education of children at this time was commonly the responsibility of an educated father. However, E.I. DuPont's travels made this impossible. Thus the education of the DuPont children was conducted through older siblings, specifically Victorine. Instead of sending their children to a public school for poor children or to a housewife, they sent Victorine to finishing school when she was 13. At 15, Victorine was considered qualified to teach her younger siblings.

Powder Mill workers and their families also lived in towns near the powder yard or even along the Brandywine on DuPont property at Eleutherian Mills. Some of these workers' communities included private family homes, small villages of dwellings, and larger facilities that rented living spaces to employees. The Upper Banks referred to the original powder yards, the main DuPont residence, and workers' communities upstream along the Brandywine. This area was part of the property purchased and developed by E.I. DuPont in 1802. Many of the workers' homes were reported to be damaged by the explosion of 1890, and subsequently leveled in 1915. Charles Banks, which comprised ten to fifteen residences, was located downstream from the Upper Banks and located in front of smaller communities of four to six row home units, specifically Duck Street and Chicken Alley. Other workers' communities included Walker's Bank and Henry Clay Village. The communities and villages developed within and near Eleutherian Mills also provided taverns, general stores, schools, post offices, and more. 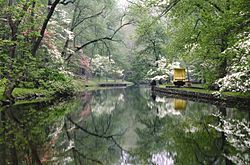 Mill race which supplied water power to the mills. A railway car is on the right.

The mill buildings used in the manufacture of gunpowder were built with strong stone-walled structures on three sides; but were only covered by light wood structures on the fourth side, which faced out onto the Brandywine Creek. When an accident occurred, the explosion was directed away from the other mills and storage areas and over the creek.

Water power was provided from a mill race behind the mills, thus further isolating the mills in case of accident. One water wheel was often used to provide power to two mills. Water turbines were introduced in the 1840s. Alfred Victor du Pont acquired additional property, down stream from the Eleutherian Mills, to add to the manufacturing site. One of these properties was called Hagley, and it became known as the Hagley Yard. 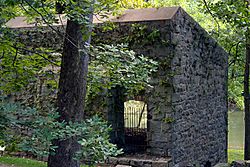 Unrestored mill on the Brandywine 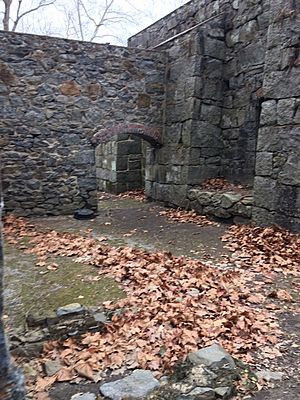 Interior view of powder mill on Hagley Yard section of property as of November 2018. 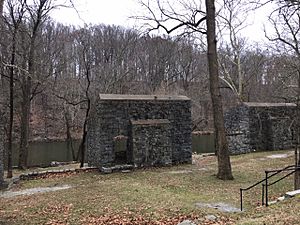 Exterior view of powder mills on Hagley Yard section of property as of November 2018. 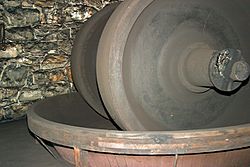 Edge-runner mill in a restored mill

Most of the industrial remains are located in the Hagley Yard. The mills were used in the purification, crushing, and mixing of charcoal, sulfur, and saltpeter. Other mills in the complex were used for glazing and corning, making metal powder kegs, and in cotton and woolen manufacturing. Stables, offices, a machine shop, and a steam powerhouse from the late 19th century also were located in the complex, as was a narrow gauge railway.

After the introduction of smokeless powder, the mills were to be closed in the 1910s, but were kept open at the request of the federal government until after the end of World War I.

In 1952 family members donated 185 acres (0.75 km2) of land and the DuPont company established a $6,000,000 endowment for the Eleutherian Mill-Hagley Foundation for a museum of industrial history.

The site was declared a National Historic Landmark in 1966.

It is located on Delaware Route 141 at the Tyler Mcconnell Bridge spanning the Brandywine Creek.

All content from Kiddle encyclopedia articles (including the article images and facts) can be freely used under Attribution-ShareAlike license, unless stated otherwise. Cite this article:
Eleutherian Mills Facts for Kids. Kiddle Encyclopedia.