Elmdale is a city in Chase County, Kansas, United States. As of the 2020 census, the population of the city was 40. It is located along U.S. Route 50 highway. 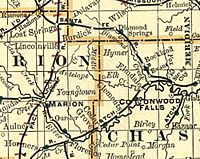 In 1806, Zebulon Pike led the Pike expedition westward from St Louis, Missouri, of which part of their journey followed the Cottonwood River through Chase County near the current city of Elmdale.

In 1871, the Atchison, Topeka and Santa Fe Railway built a main line east-west through Elmdale. In 1996, it merged with Burlington Northern Railroad and renamed to the current BNSF Railway. Most locals still refer to this railroad as the "Santa Fe".

In 1873, a post was relocated from Middle Creek (an extinct town), to the rail community of Elmdale.

Elmdale was incorporated in 1904.

There have been numerous floods during the history of Elmdale. In June and July 1951, due to heavy rains, rivers and streams flooded numerous cities in Kansas, including Elmdale. Many reservoirs and levees were built in Kansas as part of a response to the Great Flood of 1951. A levy was built and saved the town from numerous floods, but in 1998 a flood went over the levy.

In 1967, the high school closed, then later the grade school. All students currently attend schools in Cottonwood Falls.

The climate in this area is characterized by hot, humid summers and generally mild to cool winters. According to the Köppen Climate Classification system, Elmdale has a humid subtropical climate, abbreviated "Cfa" on climate maps.

Elmdale has one building on the National Register of Historic Places (NRHP).

Elmdale is part of the Emporia Micropolitan Statistical Area.

There were 23 households, of which 26.1% had children under the age of 18 living with them, 39.1% were married couples living together, 4.3% had a female householder with no husband present, 4.3% had a male householder with no wife present, and 52.2% were non-families. 43.5% of all households were made up of individuals, and 13% had someone living alone who was 65 years of age or older. The average household size was 2.39 and the average family size was 3.09.

Before the creation of USD 284, the Elmdale Cougars won the Kansas State High School class B baseball championship in 1961. In 1967, the high school closed, then later the grade school.

U.S. Route 50 highway and BNSF Railway pass through the city.

All content from Kiddle encyclopedia articles (including the article images and facts) can be freely used under Attribution-ShareAlike license, unless stated otherwise. Cite this article:
Elmdale, Kansas Facts for Kids. Kiddle Encyclopedia.