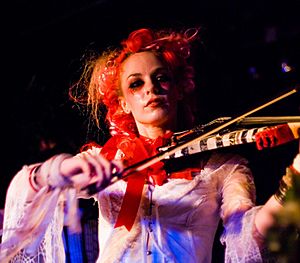 Emilie Autumn Liddell (born on September 22, 1979) is an American singer and violinist. She started learning to play the violin when she was four years old. She calls her style Victoriandustrial. It is influenced by the Victorian era. She performs with The Bloody Crumpets.

Autumn left school when she was nine or ten. She went to Indiana University for two years. She left because the university would not let her wear corsets.

Autumn released On a Day: Music for Violin & Continuo on her label Traitor Records. In 2000 a book of poetry that she wrote was published.

In 2007 A Bit o' This & That was released to iTunes. In 2010 The Asylum for Wayward Victorian Girls was published.

In 2012 Autumn released her third studio album, Fight Like a Girl.

Autumn has bipolar disorder. She is vegan.

All content from Kiddle encyclopedia articles (including the article images and facts) can be freely used under Attribution-ShareAlike license, unless stated otherwise. Cite this article:
Emilie Autumn Facts for Kids. Kiddle Encyclopedia.