Empire is a village in Leelanau County in the U.S. state of Michigan. The population was 375 at the 2010 census. The village is located within Empire Township.

Empire was founded in 1851. It was incorporated as a village in 1895 with E. R. Dailey, the head of the Empire Lumber Company which was the main employer here, as the first president of the village. The city was named after the schooner "Empire", which was icebound in the city during a storm in 1865.

The Empire Lumber Company operated from 1887 to 1917, dominating this once booming lumber town. George Aylsworth operated the first mill between 1873 and 1883. Potter and Struthers built a second mill in 1885, which T. Wilce Company purchased in 1887. Called the Empire Lumber Company, it expanded to one of the largest and best equipped hardwood mills in the area, capable of producing up to 20 million feet of lumber a year. Docks, several businesses, and a railroad sprang up in Empire. Destroyed by fire in 1906, the mill was quickly rebuilt. The mill burned again in 1917. With most of the nearby virgin timber gone, the mill was not replaced. 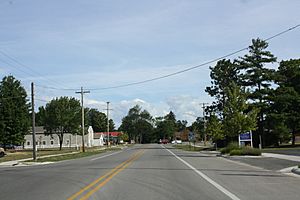 Situated approximately 22 miles (35 km) due west of Traverse City, Empire is nestled in the center of the Sleeping Bear Dunes National Lakeshore. With the Empire Bluffs to the south and the widely recognizable sand dunes of the National Lakeshore to the north, the area possesses breathtaking vistas of the dunes, North Manitou and South Manitou islands, and Lake Michigan. Most Sleeping Bear Dunes panoramas portrayed on postcards are taken from a walking trail which runs to the top of the Empire Bluffs. A wide beach separates Lake Michigan from its close neighbor, South Bar Lake. The much smaller South Bar Lake stays considerably warmer than the big lake during the summer months, and is good for young children.

The Empire beach boasts the Robert H. Manning Memorial Light, which was built in 1991 by O'Brien Brothers Construction as a memorial to Robert H. Manning, a lifelong resident of Empire and avid fisherman. Additionally, the beach offers a famous antique anchor which was discovered by Douglas Manning, son of Robert H. Manning, and Michelle Stryker in 1977. Every year, the village of Empire celebrates the raising of the anchor on the third Saturday in July.

The small village of Empire is located up a short hill, just a few minutes walk from the beach. 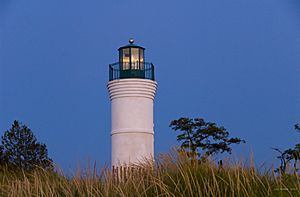 There were 211 households of which 12.8% had children under the age of 18 living with them, 40.8% were married couples living together, 6.2% had a female householder with no husband present, 1.9% had a male householder with no wife present, and 51.2% were non-families. 46.9% of all households were made up of individuals and 18.4% had someone living alone who was 65 years of age or older. The average household size was 1.78 and the average family size was 2.50.

There were 187 households out of which 16.6% had children under the age of 18 living with them, 47.1% were married couples living together, 5.9% had a female householder with no husband present, and 43.9% were non-families. 39.6% of all households were made up of individuals and 16.6% had someone living alone who was 65 years of age or older. The average household size was 2.02 and the average family size was 2.70. 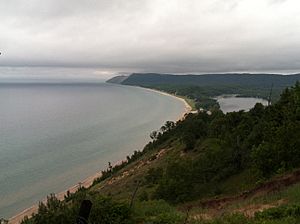 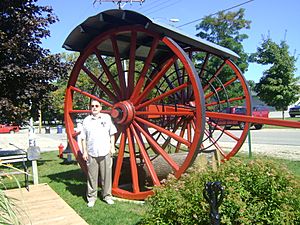 There are a number of recurring local events. A calendar is available.

All content from Kiddle encyclopedia articles (including the article images and facts) can be freely used under Attribution-ShareAlike license, unless stated otherwise. Cite this article:
Empire, Michigan Facts for Kids. Kiddle Encyclopedia.