Harrisville is a city in the U.S. state of Michigan and the county seat of Alcona County. The population was 493 at the 2010 census, making Harrisville the sixth-smallest city by population in the state of Michigan. The city is surrounded by Harrisville Township but is administratively autonomous. Located on Lake Huron, it is an official Michigan Department of Natural Resources Harbor of Refuge.

The place was first known as Davison's Mill after Crosier Davison, who in partnership with Simeon Holden, had purchased land and water power rights here in 1854. Benjamin Harris and his sons, Levi and Henry, of West Bloomfield, New York bought out the partners. A post office established on September 16, 1857 was named Harrisville, with Levi as the first postmaster.

The Harris sold out to Weston, (George L.) Colwell & Company, who had H.G. Rothwell plat the community in 1870. Harrisville was incorporated as a village in 1887 and as a city in 1905.

According to the United States Census Bureau, the city has a total area of 0.61 square miles (1.58 km2), all land. It is considered to be part of Northern Michigan.

The city is on the western shore of Lake Huron and has a harbor for recreational boaters. The harbor is a center for salmon and trout fishing. It is also a designated "Harbor of Refuge" on Lake Huron by the US Coast Guard.

The town also boasts Harrisville State Park, which includes a wooded campground along the beach.

Sturgeon Point Light Station, a lighthouse and museum, is a few miles to the north, and is open to the public.

Harrisville is on the edge of Huron National Forest, which offers outdoor recreational opportunities such as hunting, swimming, cross-country skiing and trout fishing. The forest contains 330 miles (530 km) of hiking trails. The Huron and Manistee National Forests were separately designated, but were combined in 1945 for administrative purposes.

The Lake Huron beaches in and around Harrisville (including two state parks) have been recognized as being among the "top ten in Michigan." "Old-fashioned lake vacations abound on this pretty stretch of Lake Huron."

Harrisville is situated along the Lake State Railway, formerly the Detroit and Mackinac Railway (D&M). The D&M passenger depot is made of stone, which makes it one of two along the railway (the other being in Standish). It is privately maintained by local citizens as part of the municipality's historical legacy.

There were 231 households, of which 18.2% had children under the age of 18 living with them, 42.4% were married couples living together, 11.7% had a female householder with no husband present, 2.2% had a male householder with no wife present, and 43.7% were non-families. 38.5% of all households were made up of individuals, and 20.3% had someone living alone who was 65 years of age or older. The average household size was 1.96 and the average family size was 2.55.

Harrisville City Airport is 2200 feet (671 m) in length; it is located on Walker Road. A larger public airport that serves the area and has nearly all weather capability is Oscoda-Wurtsmith Airport. 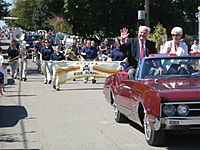 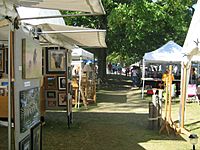 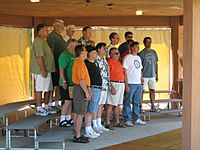 All content from Kiddle encyclopedia articles (including the article images and facts) can be freely used under Attribution-ShareAlike license, unless stated otherwise. Cite this article:
Harrisville, Michigan Facts for Kids. Kiddle Encyclopedia.