The Sturgeon Point Light Station is a lighthouse on Lake Huron in Haynes Township, Alcona County, northeastern lower Michigan. Established to ward mariners off a reef that extends 1.5 miles (2.4 km) lakeward from Sturgeon Point, it is today regarded as a historic example of a Cape Cod style Great Lakes lighthouse.

The light station was built in 1869 by the United States Lighthouse Board. The Board was in the midst of a lighthouse building boom on the Great Lakes due to increased maritime traffic, and in response to a large number of lost ships and men: Congress approved 70 lights on the western Great Lakes in thirty years: 28 in the 1850s, and 21 in each of the following decades. The location is roughly halfway between Alpena's Thunder Bay Island and the northern entry to Saginaw Bay. Importantly, this point sits atop a formidable reef that is an imminent hazard to navigation. Moreover, the area north of Sturgeon Point and south of Alcona, Michigan is a bay that can provide shelter from northerly and southerly winds and waves. Historically, this area is locally known as "Sanctuary Bay," which is in distinct contrast to "Misery Bay", the area to the north, between Alpena and Thunder Bay Island. The Lighthouse Board further recognized that being able to navigate close to (but not over) the reef and the point would aid transport into and out of Saginaw Bay.

It is made of brick masonry on an ashlar limestone foundation. The tower stands 70 feet 9 inches (21.56 m) in height, with a diameter of 16 feet (4.9 m) at the base. The focal plane is listed by the Coast Guard at 69 feet (21 m), which would be the height from the "mean high water mark," That figure is important, in that it could be used by mariners to chart their location, using a method of triangulation to give them the distance to the light. The adjoining, two-story Lighthouse keeper’s quarters was designed in the Cape Cod style and built of the same materials. At the time, the Board was often using this architectural motif. In fact, Poverty Island Light, built in 1874, is considered to be a "sibling" as it is a direct copy of Sturgeon Point.

The light was set to begin its service with a sixth-order Fresnel lens which was upgraded to a 3½-order lens (that was originally installed at Oswego, New York). It was one of only a dozen used around the country, most of which were on the Great Lakes. The other Great Lakes 3½-order lenses were at (in alphabetical order): DeTour Reef (two 3½-order lenses, after the bivalve lens broke), Eagle Bluff, Grays Reef, Huron Island, Michigan Island, St. Helena Island, and Toledo Harbor.

The lens at Sturgeon Point is without a doubt a third-and-a-half order lens. As Terry Pepper, Executive Director of the Great Lakes Lighthouse Keeper Association, wrote on August 6, 2012: "I have measured it personally."

As further proof, on July 22, 1870, the District Lampist visited the Station and made the following entry in his inspection journal:

"Sturgeon Point, No. 449 – This is a new station first lighted to the opening of navigation this spring. The illuminating apparatus consists of a 3 ½ Order Fresnel lens of 270°, Henry Lepaute maker, and is fitted with Funck’s hydraulic float lamps, showing a fixed white light. The illuminating apparatus was in excellent condition with the exception of one of the spare burners which had been damaged. It was taken on board for repairs. A spirit lamp to aid in heating the oil in severe cold weather is required."

However, for reasons unknown, there are conflicting reports as to the size of the present lens, with some reporting it as a third order, and orders as a 3½-order Fresnel lens.

The 3½-order Fresnel lens is still in place and was in use as of July 31, 2012. This is one of only 70 such Fresnel lenses that are still operational in the United States, sixteen of which are use on the Great Lakes of which eight are in Michigan.

In 1876, the light station was joined in its service by an adjacent United States Life-Saving Service station.

There is no question that the presence of this light on this highly dangerous reef has forestalled "countless accidents."

In 1875, a U.S. Life-Saving Service station was opened. The first light keeper became the first captain of the surf team.

In 1939 the U.S. Lighthouse Service also merged under the control of the U.S. Coast Guard. In the same year the station was electrified and automated.

By the 1940s, the light was fully automated, and the Coast Guard withdrew all personnel in 1941 and thereafter dismantled the life-saving station. One source claims (erroneously) that the lifesaving saving station and the lighthouse were "abandoned" in the 1940s; in point of fact personnel were withdrawn, but the light remains an active aid to navigation to this day.

The lifesaving bell was stolen in 1951, and was "anonymously returned" in 2002 to the custody of the Alcona County Historical Society (according to a plaque at the light). The fog horn building was torn down. The brick outhouse, built in 1869, remains, however.

The Life Saving station's foundation is still visible. The lifesaving watch tower also was torn down.

In 1982 the Alcona Historical Society leased the light and began a three-years restoration project.

The keeper's house itself fell into disrepair until it was taken over by the Alcona Historical Society in 1982. 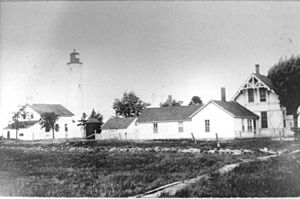 The light and United States Life-Saving Service station in approximately 1900-1910. 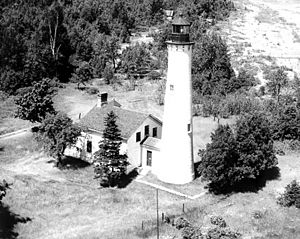 Ownership was transferred from the Coast Guard to the Michigan Department of Natural Resources under the terms of the National Historic Lighthouse Preservation Act, and operations are maintained by the Alcona Historical Society. The site is part of the Sturgeon Point State Park under the auspices of the Michigan DNR.

During the planning stages of the Thunder Bay National Marine Sanctuary, the Sturgeon Point Light was proposed to mark the southernmost extent of the sanctuary, although the final sanctuary boundary was drawn short of the light. Nevertheless, 15 historic shipwrecks have been identified with place of loss listed as "Sturgeon Point". Indeed, the question of expanding the National Sanctuary and Underwater Preserve continues to be a subject of inquiry and discussion.

Although the United States Coast Guard continues to operate the light, the property has been transferred to the Michigan Department of Natural Resources under the terms of the National Historic Lighthouse Preservation Act. The transfer from the Department of the interior was effective May 2005. The Alcona Historical Society operates a museum in the restored historic buildings. The Sturgeon Point Light was added to the National Register of Historic Places in 1984. Sturgeon Point, on which the lighthouse is built, is a Michigan Scenic Site overseen by the Michigan Department of Natural Resources. It is listed as part of the National Maritime Heritage Program with the National Park Service. The station structure is also listed as a state historic site in February 1982.

Additionally, it is on the National Register of Historic Places, Reference #84001370, Name of Listing: STURGEON POINT LIGHT STATION (U.S. COAST GUARD/GREAT LAKES TR) and is also on the state inventory, being listed in 1969.

In 2006, the U.S. Coast Guard sought to forever darken the light, and in fact shut it off for a short time. Resistance to the initiative developed, and over five thousand signatures were collected on petitions to "Save Our Light." Numerous public comments were submitted as part of the regulatory process. In due course, an arrangement was made whereby the light was left on (albeit with its operating expenses to be paid by the Alcona County Historical Society) and it was designated as an official "seasonal private aid to navigation." from April 1 through November 1. The Coast Guard reversed course after the public pressure, and after the intervention of Senator Debbie Stabenow and the fresnel lens and the light remained on through July 2012.

A transfer of ownership of the light itself, from the Coast Guard to the Michigan Department of Natural Resources, is still languishing as of 2012 under the terms of the National Historic Lighthouse Preservation Act. The Alcona County Historical Society is a lessee at this time.

Because of its picturesque form and location, it is often the subject of photographs, paintings, drawings, and even of needlepoint illustrations. In fact, it is also the setting of an illustrated children's storybook.

The site supports sea grasses in many forms, goldenrod, Queen-Anne's lace, yarrow, and wild strawberry. Gulls, cormorant, killdeer, loons are frequent visitors, along with bald eagles that make their home on the bay.

The following contact information may be of use to travelers: Sturgeon Point Lighthouse & Maritime Museum Sturgeon Point Road Harrisville, MI 48740 (989) 724-5107

Current events at the lighthouse and museum

All content from Kiddle encyclopedia articles (including the article images and facts) can be freely used under Attribution-ShareAlike license, unless stated otherwise. Cite this article:
Sturgeon Point Light Facts for Kids. Kiddle Encyclopedia.