Entwistle is a hamlet in Alberta, Canada within Parkland County. It is located at the Yellowhead Highway's intersection with Highway 22/Highway 16A, approximately 95 kilometres (59 mi) west of Edmonton on the Yellowhead Highway. Entwistle sits on the east banks of the Pembina River near the halfway point between Edmonton and Edson.

Entwistle has grown to become a popular staging area for the oil and gas industry. It is also quite famous for its annual rodeo, the Pembina River Provincial Park, and being the Diamond Capital of Canada.

Entwistle is within the federal riding of Yellowhead, provincial electoral district of Stony Plain and Parkland County's Division 6.

Soon, there were enough people living in the boomtown to warrant a post office. But, to get a post office, they needed a name for the town. The town was informally known as "Pembina", after the river, but that name was rejected by the federal government, citing duplication. The names “Burke” and “Harmer” were also proposed, and again, each one rejected on the grounds of duplication. Entwistle was quite embarrassed when people started suggesting that he name the town after himself. Entwistle was fairly certain that 'Entwistle' was already the name of a town, as he knew of at least one town called Entwistle in England. But, Entwistle's wife Mary went and submitted the name 'Entwistle,' and it was accepted. For years after, Entwistle was often joked about how he found a way to put his name on the map, to which Entwistle would always reply, “It wasn't me who put it there – it was Mary.”

Entwistle was officially incorporated as a village on March 26, 1909. James Entwistle was elected the first mayor in April 1909.

The railway trestle was completed in 1910. Shortly after, the Canadian Northern Railway came close to Entwistle, and built their own railway bridge from 1910 to 1912. The railway construction boom started moving west in 1912, but many stayed behind in the Village of Entwistle. In those early decades, Entwistle had a thriving agriculture industry, along with timber and the coal mines in neighbouring Evansburg.

The population of Entwistle according to Parkland County's 2009 municipal census is 534. 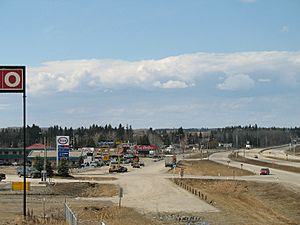 In 1958, Entwistle resident Einar Opdahl found a diamond in the banks of the Pembina River. The diamond weighed 0.83 carats (166 mg), and was described as being “a perfect octahedron with eight faces; a clear, colorless stone.” Opdahl sold the diamond to gem cutter Ed Arsenault for $500. It was later claimed that Arsenault discovered the diamond.

Opdahl and Arsenault’s discovery and the mini-boom in diamond prospecting led Entwistle to claim the title Diamond Capital of Canada in 1994.

The Grand Trunk Pacific railway bridge whose construction caused Entwistle to spring up is still in operation today. It is a vital part of the Canadian National Railway main line, connecting Canada to the Pacific Ocean. An average of 20 trains travel across it per day. The bridge itself is 910 feet (280 m) long and 214 feet (65 m) high. It is currently the fifth-highest railway bridge in Western Canada. 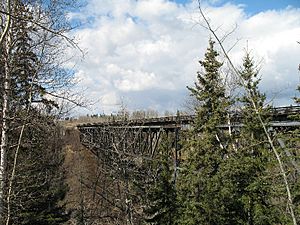 Construction on the bridge began in 1908. As there were no cranes big enough to carry steel back then, a massive false bridge and scaffolding was built out of wood. The steel bridge itself was completely pre-fabricated in Scotland. The Scottish engineer assembled the bridge in Scotland, ran their tests on it, and then carefully dismantled it. The bridge was shipped in pieces across the Atlantic, and brought out to Entwistle on the railway. The pieces began arriving in 1909, and the steel bridge was slowly assembled. The engineers’ measurements were so accurate, that no modifications were needed on site.

As the steel structure was laid in place, the wooden scaffolding and false bridge were gradually dismantled. Construction was completed in 1910. After its first century of use, it has required no major repairs; only routine maintenance. 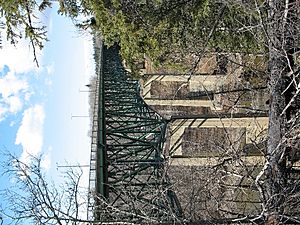 The Yellowhead Highway Bridge is runs parallel to the Pembina River Viaduct and built from 1961 to 1962. Even though it was opened to traffic in 1962, a grand opening was not held until July 24, 1963. A crowd of about 1500 assembled for the grand opening. Speeches were given by the chief bridge engineer, the deputy minister of highways, the mayors of Entwistle and Evansburg, and representatives of Entwistle’s youth and senior communities. The ribbon was cut by the Honorable Gordon Taylor, the Minister of Highways. 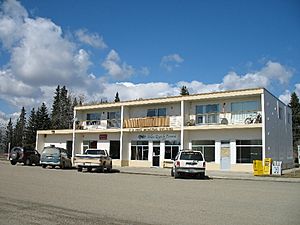 Read sold off his business and retired in 1946. When he died in 1965, he left the bulk of his estate to the Village of Entwistle, with the instruction that it be used “to build something that will be used by the whole community.” In 1973, the J.D. Read Memorial Building was built. Until recently, the J.D. Read Memorial Building housed Entwistle’s bank, post office, and public library and it is currently home to a newly expanded post office and a travel agency.

It is unknown when Grand Trunk started being referred to as Old Entwistle, but the name became common in the late 1980s. Old Entwistle is the original location of Entwistle’s train station, not the whole community.

All content from Kiddle encyclopedia articles (including the article images and facts) can be freely used under Attribution-ShareAlike license, unless stated otherwise. Cite this article:
Entwistle, Alberta Facts for Kids. Kiddle Encyclopedia.