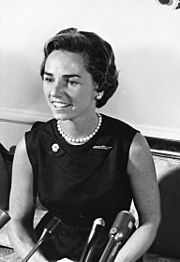 Skakel was born on April 11, 1928 in Chicago, Illinois. She studied at Manhattanville College of the Sacred Heart in 1945.

Skakel meet Robert while he was dating her sister. On June 17, 1950 Robert and Ethel married in Greenwich, Connecticut. They had eleven children. Two of their children died.

All content from Kiddle encyclopedia articles (including the article images and facts) can be freely used under Attribution-ShareAlike license, unless stated otherwise. Cite this article:
Ethel Skakel Kennedy Facts for Kids. Kiddle Encyclopedia.