Exshaw is a hamlet in Alberta, Canada within Municipal District (MD) of Bighorn No. 8. Located approximately 90 kilometres (56 mi) west of downtown Calgary and 15 kilometres (9.3 mi) east of Canmore, Exshaw is situated within the Bow River valley north of the Bow River.

The hamlet was once located within Rocky Mountains Park later Banff National Park, with the original park entrance being only a couple miles east of Exshaw.

Sir Sanford Fleming named Exshaw after his son-in-law, E. William Exshaw (B. 15 Feb 1866, Bordeaux, D. 16 Mar 1927; of Anglo-Irish descent; and Sailing Olympic Gold Medalist at the Paris 1900 Summer Olympics), who with Fleming helped establish the Western Canada Cement and Coal Company. William Exshaw visited in 1908 when a banquet was held in his honour by the staff of WCC&C.

Robert D. Hassan, an American mechanical engineer, was hired in 1906 to build a mill in Exshaw, Alberta for the Western Canada Cement and Coal Company. He was assisted in building the plant by Alexander Graham Christie, 1880–1964, a mechanical and electrical engineering graduate from the University of Toronto, who later in 1909 became associate professor of engineering at the University of Wisconsin, and in 1914 joined the School of Engineering at Johns Hopkins University in Baltimore, Maryland.

Although the original cement plant was further west, the community has had a large plant for many years. The cement plant, now owned by Lafarge North America, is the main industry in the community. The limestone is quarried on the mountain north of the plant. 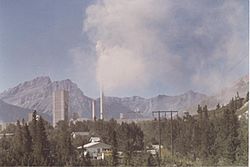 Exshaw townsite with plant from the east, looking west.

A number of other plants and quarries are in the area east and west. West is Baymag calcined magnesium oxide plant, and east, Graymont lime and limestone products plant.

Edwin Loder organized a company, Loders Lime, to take over lime kilns already in operation at the community of Kananaskis, approximately 3 kilometres (1.9 mi) east of Exshaw. Due to the need for more capital a new company was incorporated in 1906 and a new plant completed by 1908. A peak on Door Jam Mountain, above the hamlet and plant, is named after him. The Loder name is still connected with the area.

In 1935, Mr. Zeller recognized the three Doukhobor bandits, Posnikoff, Voyken and Kalakous, who had shot Sergeant T. S. Wallace, Royal Canadian Mounted Police, near Banff, which led to their capture.

Bruno Gerussi, a Canadian television actor who is best known for the lead role in the CBC series The Beachcombers, grew up in Exshaw.

East of Exshaw are smaller company town communities of Kananaskis (lime plant), which is not the recreational area of the same name, and Seebe (power dam), which is now closed but proposed for future residential redevelopment. A small ranch area, now mainly dude ranches, is also near the hamlet. Of note is the Brewster's Kananaskis Ranch & Golf Course, which sits on the original homestead property of Bud Brewster and has remained in the family's possession since the 1880s.

A number of smaller parks with camping facilities have also developed in the east Bow Valley. Directly across the Bow River south from Exshaw is the Hamlet of Lac des Arcs although no bridge connects the two hamlets.

A dam on the Bow River is east of Seebe.

The smaller Exshaw Mountain, 1783 m (5850 ft.), is north of the hamlet, and is locally known as Cougar Mountain. Across from the community south beyond Lac des Arcs is Heart Mountain, known as an easier scramble. People often marry outdoors on this mountain because of the heart shape.

Exshaw Creek, locally known and identified on the Highway 1A bridge as Canyon Creek, runs through the hamlet. In 1958, Alan McGugan, et al., identified a new species of the pelecypod Megalodon in a river cliff of Exshaw Creek and gave the new specific name M. banffensis, for the proximity of the Banff area.

The eastern portion of the hamlet is on the flood plain for Jura (pronounced Yurah) Creek. In 1937, P.S. Warren described outcrops on the banks of Jura Creek, naming these the Exshaw Formation. The Jura Creek valley is known to provide a good introduction to some Front Range geology, with the exposed formations including the Palliser (Devonian), Exshaw and Banff (Mississippian). The naming of Jura Creek was from misidentified Jurassic fossils, which are actually Paleozoic, not Jurassic, in age.

Grotto Creek, 3 km west, has pictographs, including a possible "fluteplayer" Kokopelli image that may be from the Flute Clan of the Hopi tradition.

The local area is known for wildlife, despite the industrial development. Duncan MacGillivray, with explorer David Thompson on his survey of the Canadian Rockies, first encountered a Big Horn Sheep, near Exshaw, on 30 November 1800, which led to the specimens collected and subsequent scientific naming. Mount MacGillivray, to the west of Heart Mountain, is his namesake.

All content from Kiddle encyclopedia articles (including the article images and facts) can be freely used under Attribution-ShareAlike license, unless stated otherwise. Cite this article:
Exshaw Facts for Kids. Kiddle Encyclopedia.