Kids Encyclopedia Facts
Not to be confused with Eye, Cambridgeshire.

Eye is a market town and civil parish in the north of the English county of Suffolk, about 4 miles (6 km) south of Diss, 17.5 miles (28 km) north of Ipswich and 23 miles (37 km) south-west of Norwich. The population in the 2011 Census of 2,154 was estimated to have risen to 2,361 in 2019. It lies close to the River Waveney, which forms the border with Norfolk, and on the River Dove. Eye is twinned with the town of Pouzauges in the Vendée department of France.

The town of Eye derives its name from the Old English word for 'island' and it is believed that the first settlement on the site would have been almost entirely surrounded by water and marshland formed by the River Dove and its tributaries. The area is still prone to flooding in areas close to the River Dove.

There have been Palaeolithic, Mesolithic, Neolithic and Bronze Age finds in and around Eye but the earliest evidence of settlement in the town dates from the Roman period and includes buildings and coins dated circa 365. A large Anglo-Saxon cemetery including many urned cremations and some furnished inhumations, in use during the 6th century, was excavated near the Waterloo Plantation, Eye, in 1818.

Before the Norman Conquest, Eye was one of the numerous holdings of Edric of Laxfield, a wealthy and influential Saxon and the third largest land holder in Suffolk. After the Norman Conquest, the importance of the town was firmly established in the region when the Honour of Eye was granted to William Malet, a Norman Lord, and continued to be held by royal or noble families until 1823. Between 1066 and 1071, Malet constructed a castle, to establish his military and administrative headquarters, and started a highly successful market, initiating the urbanisation of Eye. Later in 1086-7, William's son Robert Malet, tenant-in-chief of the Honour of Eye in the hundred of Hartismere, founded Eye Priory, a Benedictine Priory of St Peter, a cell of the Abbey of Bernay in Normandy. 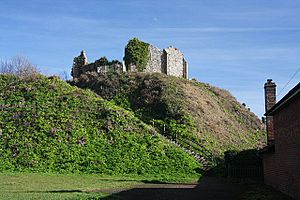 Eye began to lose its strategic importance after 1173 when the castle was attacked by Hugh Bigod, 1st Earl of Norfolk, during the rebellion against Henry II, and later during the Second Barons' War of 1265 after which it never regained its former status. Its prison continued in use up until the early 17th century despite a programme of demolition of most of the castle buildings during the 14th century. A windmill, built in 1561–62, stood on the motte until the circular mock keep was built in 1844. The ruins of the keep are still in place today, and Castle Street and Church Street trace the elliptical shape of the former outer bailey.

Eye was once the smallest borough in the country, its claim based on the 1205 Charter of King John. The charter was renewed in 1408 then many more times by successive monarchs. However, in 1885 the town clerk of Hythe proved that the original charter belonged only to Hythe in Kent, the error having arisen from the similarity of the early English names. The error was confirmed by archivists in the 1950s but borough status was not discontinued until 1974 after government reorganisation when Eye became a civil parish but retained a Town Council, a Mayor and the insignia. From 1571 to 1832 Eye returned two MPs, then, following the Reform Act 1832, a single MP until 1983 after which the Eye Constituency became the Suffolk Central constituency.

The earliest mention of industry in Eye records that in 1673 'the women's employ in this town is making of bone lace' and in 1830, 'the humbler class of industrious females employ themselves in lace making'. It would appear that Eye was at the centre of a localised lace making industry for many years. The last lacemaker in the town died in 1914. In 1846 Eye Borough Council failed in its attempt to route the new London-Norwich railway line through Eye. The line, completed in 1849, went instead through Diss ensuring its growth in prosperity and population while the importance of Eye waned. Eye railway station, located at the end of a branch line from Mellis, closed to passengers in 1931 and to freight in 1964.

Eye airfield, to the north-east of the town, began as RAF Eye occupied by the 490th Bomb Group of the USAAF's VIII Bomber Command during World War II.

Eye today has a population of just over 2000. Hartismere High School provides secondary level education in the town which also has a primary school. A health centre, a library, police station and retained fire station also serve the town. A community hospital opened in 2012 after the previous hospital closed in 2005. The Town Moors recreation site has play areas including a skateboard park, football pitches and a large area of woodland walks.

The town's Guildhall is a Grade I listed building which is now a private residence. Eye Town Hall, an imaginative and unorthodox building dating from 1856 and listed Grade II*, was designed by Edward Buckton Lamb, one of the 'Rogue Architects' of the mid-Victorian period. The weekly country market, held in the town hall on Wednesdays between 10 and 11 am, was shortlisted for the 2009 BBC Food and Farming Awards.

The Bank, Arts Centre has renovated the former HSBC/Midland Sandstone Bank building to an arts and learning centre. 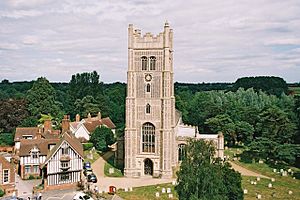 The Church of St Peter and St Paul, dates from the 14th century. It is considered one of the finest churches in the county. A 13th century Early English Period doorway, from a former building, was retained in the construction of the church. In the 15th, and again the 16th century, there were periods of new work and of renovation, including the installing of an Altar Tomb to William Honnyng in the South Chapel, or Lady Chapel and one to Nicholas Cutler to the north west of the nave. The church was restored in 1868 by James Colling, a London architect. A particular feature of the church is the magnificent late-15th century rood screen which has a loft and rood designed by Ninian Comper in 1925. The screen is reputed to originate from Great Massingham Priory in Norfolk.

All content from Kiddle encyclopedia articles (including the article images and facts) can be freely used under Attribution-ShareAlike license, unless stated otherwise. Cite this article:
Eye, Suffolk Facts for Kids. Kiddle Encyclopedia.