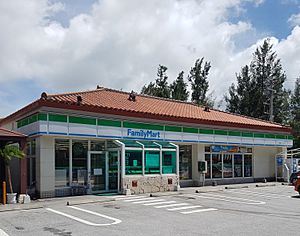 The logo of FamilyMart

FamilyMart Co., Ltd. (株式会社ファミリーマートcode: ja is deprecated , Kabushikigaisha Famirīmāto) is a chain of convenience stores in Japan. It is the second biggest chain in Japan, 7-Eleven, is the biggest chain. FamilyMart used to be in the United States, it was called Famima!!, but then closed down.

FamilyMart can also be found in other countries, like, China, Philippines, Vietnam, and Thailand.

All content from Kiddle encyclopedia articles (including the article images and facts) can be freely used under Attribution-ShareAlike license, unless stated otherwise. Cite this article:
FamilyMart Facts for Kids. Kiddle Encyclopedia.