Farlington is a primarily residential district of the city of Portsmouth in the county of Hampshire, England. It is located in the extreme north east of the city on the mainland and is not on Portsea Island unlike most of the other areas of Portsmouth. Farlington was incorporated into the city in 1932 and now forms a continuous development with Cosham and Drayton. To the north of Farlington is the suburb of Widley and to the east is the town of Havant. To the west is the suburb of Drayton, and to the south is Langstone Harbour.

Farlington is bordered to the south and east by the A27 road and A3 road respectively. The A2030 road known as the Havant Road is the principal local road that runs east/west through the middle of Farlington. The M27 motorway lies 1 km to the west of Farlington. 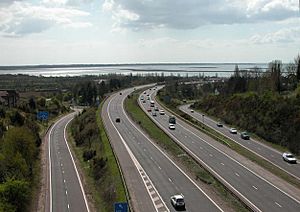 The A3(M) and A27 road interchange on the eastern edge of Farlington.

Notable persons connected to Farlington include Thomas Pounde (29 May 1539 – 5 March 1614), an English Jesuit lay brother. After some thirty years spent in Elizabethan prisons for his Catholic faith, he is said to have died in the same room of the family house where he was born. In the late 16th century, the house, known as Belmont, was notorious as a safe house for recusants. An early 20th-century historian thought "The present [1905] Belmont Castle, on Portsdown Hill, [was] probably built on or near the site of the old house. However, recent archaeological proceedings indicate the house may have been in Farlington.

Thomas Atkinson, a warrant officer in the Royal Navy who served as master under Nelson and later as first master of HMNB Portsmouth is buried in Farlington, along with other members of his immediate family. Rear Admiral John Hayes, who served in the French Revolutionary and Napoleonic Wars is also buried in Farlington.

The former Lord Mayor of Portsmouth (2017-2018) Ken Ellcome was a councillor and resident of Farlington until 2019.

Multiple Olympian and Olympic champion Jim Fox lived on First Avenue, Farlington when he won the Olympic gold medal for Modern Pentathlon at the 1976 Summer Olympics.

All content from Kiddle encyclopedia articles (including the article images and facts) can be freely used under Attribution-ShareAlike license, unless stated otherwise. Cite this article:
Farlington, Hampshire Facts for Kids. Kiddle Encyclopedia.