Fasa (Persian: فسا, also Romanized as Fassa) is a city and capital of Fasa County, Fars Province, Iran. At the 2016 census, its population was 110,825, in 33,379 families. Fasa is the fourth most populous city of the province. The city dates back to the Achaemenid period.

Fasa's economy is based on agriculture and Pastoralism. Jahrom, Darab, Sarvestan, Kherameh and Estahban are neighbours of Fasa. This city is located on the road from Shiraz to Kerman, This has made Fasa a strategic and important city. 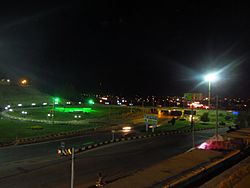 In the inscriptions of Persepolis, Fasa is mentioned as "Pashiya" or "Bashiya". Based on the contents of Tablet No. 53 of Persepolis Administrative Archives, George Glenn Cameron considers the location of the city of "Pashiya" or "Bashiya" to correspond to the current location of the city of Fasa. The word "Bashiya" is actually the Elamite form of the word Pasa. Due to the lack of the letter "P" in Arabic, the word was pronounced "Basa" and sometimes "Fasa" after the Muslim conquest of Persia and cultural exchanges. Fasa literally means "residence and camp". Researchers have also considered the meaning of the word Fasa "the city of the Persians".

Fasa is one of the historical cities of Iran. The city dates back to the Achaemenid period, when the city's name was "Pasa" or "Pashiya". In the Sassanid period, the remains of the old city, the fortress and the Sassanid fire temple, and also the presence of the Fasaei people in the political and cultural affairs of that time, show that Fasa had a special position and prosperity during this period. Fasa was conquered by the Muslims in 638 after a fierce battle. Fasa was the second most important city of Darabgerd province in the tenth century. Urban Foundations of Fasa (Grand Mosque, Bazaar, Bath, etc.) was established during the Safavid period and expanded during the Afsharids. Epidemics, famines, political games, insecurity and looting were among the most important factors in the destruction and decline of Fasa's prosperity during the Qajar period.

Fasa has a hot semi-arid climate (Köppen climate classification: BSh). Its average rainfall is about 290 millimetres (11 in) per year.

At the 2016 census, its population was 110,825, in 33,379 families. people of Fasa speak Persian language. There is also a significant Khamseh Arab minority in Fasa. Almost all of the people are Shia Muslims.

Fasa is thriving in terms of agriculture. Fasa is known as the city of wheat. Due to the favorable climate, palms, walnut trees, and citrus such as oranges, tangerines, pomegranates, pistachios, almonds, and walnuts are common in this city. Cotton cultivation has also flourished in Fasa.

Pastoralism is the second base of Fasa's economy. A variety of livestock and dairy products, wool, leather, meat, are the products of the city.

There is also an under construction petrochemical project in the city. The construction stated in 2012 and after the complete operation, It will produce Low density polyethylenes.

The "Fasaei bread" (Persian: نان فسایی) is the most significant and the main souvenir of Fasa city. Kilim, Gabbeh, Jajim, Lemon, Orange, Tangerine, Pomegranate, Walnut, Pistachio and handicrafts are other souvenirs of this city. 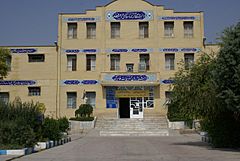 Fasa has two hospitals in operation and one hospital under construction.

Shiraz-Fasa highway, The highway which connects Fasa to Shiraz is in operation. Fasa-Darab and Fasa-Estahban-Neyriz highway projects are also under construction.

Currently, the Shiraz-Golgohar railway is passing through Fasa with the aim of connecting Shiraz to the Golgohar mines and Kerman province. The length of this route is 346 kilometres (215 mi), which is under construction in 4 phases and connects Shiraz to Golgohar through Sarvestan, Fasa, Estahban and Neyriz.

Fasa Airport is an airport near Fasa. The airport is currently inactive, but studies of the airport's development plan, improving and increasing the length of the runway with the aim of resuming commercial flights are being done. The airport has a 1,982 metres (6,503 ft) runway. 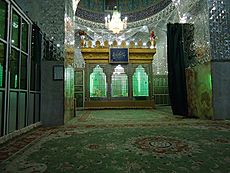 All content from Kiddle encyclopedia articles (including the article images and facts) can be freely used under Attribution-ShareAlike license, unless stated otherwise. Cite this article:
Fasa Facts for Kids. Kiddle Encyclopedia.