Filey is a small town and civil parish in North Yorkshire, England. Historically part of the East Riding of Yorkshire, it is part of the borough of Scarborough between Scarborough and Bridlington on the North Sea coast. Although it was a fishing village, it has a large beach and became a popular tourist resort. According to the 2011 UK census, Filey parish had a population of 6,981, an increase on the 2001 UK census figure of 6,819. 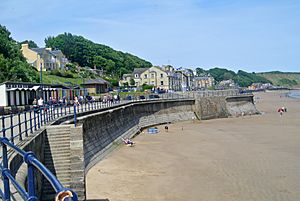 Filey, North Yorkshire. View of seaside from the south.

Filey is at the eastern end of the Cleveland Way, a long-distance footpath; it starts at Helmsley and skirts the North York Moors. It was the second National Trail to be opened (1969). The town is at the northern end of the Yorkshire Wolds Way National Trail which starts at Hessle and crosses the Yorkshire Wolds. Filey is the finishing point for Great Yorkshire Bike Ride. The 70-mile (110 km) ride begins at Wetherby Racecourse.

Filey has a railway station on the Yorkshire Coast Line. A second station at Filey Holiday Camp railway station to the south of the town served the former Butlins holiday camp. The camp has been re-developed into a 600-home holiday housing development, The Bay Filey. It is one of the largest coastal developments of this kind in the UK and the first homes were completed in 2007.

In July 2007 Filey was hit by flash floods which caused major problems. 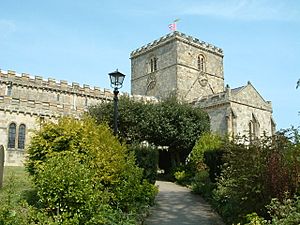 The 12th century parish church dedicated to St Oswald, on Church Hill in the north of the town, is a Grade I listed building. It is the oldest building in Filey and Nicholas Pevsner wrote "This is easily the finest church in the NE corner of the East Riding" (Buildings of England).

Filey was a small village until the 18th century when visitors from Scarborough arrived seeking the peace and quiet that Filey then offered. In 1835 a Birmingham solicitor called John Wilkes Unett bought 7 acres (28,000 m2) of land and built the Crescent, later known as the Royal Crescent, which was opened in the 1850s.

In 1931 the spire of a church was damaged by the Dogger Bank earthquake.

For more than 40 years Butlin's Filey Holiday Camp was a major factor in Filey's economy. Building began in 1939 and continued during the Second World War when it became an air force station known as RAF Hunmanby Moor. In 1945 it became a popular holiday resort with its own railway station and by the late 1950s could cater for 10,000 holiday makers. It closed in 1984, causing a decrease in the holiday makers visiting Filey.

Coast & Country Housing Limited plan to build 300 houses in Filey. Scarborough council has approved plans for the £45 million housing project off Muston Road by Coast & Country. Independent councillor Sam Cross, who represents Filey on the borough council, said: "The infrastructure of the town can't cope with it." Coast and Country replied to the concerns by stating that the houses are being built to meet a pent-up latent demand for affordable housing and other housing within the town.

All content from Kiddle encyclopedia articles (including the article images and facts) can be freely used under Attribution-ShareAlike license, unless stated otherwise. Cite this article:
Filey Facts for Kids. Kiddle Encyclopedia.