Flag of Colorado facts for kids

The flag of the state of Colorado consists of three horizontal stripes of equal width, the top and bottom stripes blue, and the middle stripe white, on top of which sits a circular red "C", filled with a golden disk. The blue is meant to represent the skies, the gold stands for the abundant sunshine the state enjoys, the white represents the snowcapped mountains, and the red represents the ruddy earth.

The flag was thought up by Andrew Carlisle Johnson in 1911 and adopted by the state's General Assembly on June 5 of the same year.

However, the legislature did not specify the size of the "C" or the exact shade of blue or red. Because of this, some flags were in slightly different colors and had the "C" wholly within the center stripe. On February 28, 1929, the General Assembly added to the statement that the flag would be the same color blue and red as the flag of the United States. On March 31, 1964, the legislature further dictated the diameter of the gold disc to be equal to the center stripe. 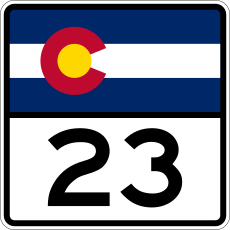 In a 2001 survey of 72 state, provincial, and territorial flags conducted by the North American Vexillological Association, Colorado's flag was ranked number 16.

The Colorado state flag is also incorporated into the design of Colorado's state highway markers. Colorado is the only state to incorporate its entire, unaltered flag design into its State Route Marker.

All content from Kiddle encyclopedia articles (including the article images and facts) can be freely used under Attribution-ShareAlike license, unless stated otherwise. Cite this article:
Flag of Colorado Facts for Kids. Kiddle Encyclopedia.