Floyd County is a county located in the U.S. state of Indiana. As of 2018, the population was 77,781. The county seat is New Albany. Floyd County has the second-smallest land area in the entire state. It was formed in the year 1819 from neighboring Clark, and Harrison counties. 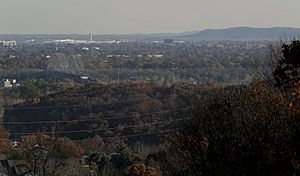 From Floyds Knobs, the view of the Sherman Minton Bridge that crosses the Ohio River and connecting Indiana and Kentucky.

For more details, see History of the French in Louisville

Floyd County, originally the Shawnee Indians hunting ground, was conquered for the United States by George Rogers Clark during the American Revolutionary War from the British. He was awarded large tracts of land in Indiana, including almost all of present-day Floyd County. Clark sold land to the settlers who began arriving as soon as peace returned.

In 1818, New Albany was a large enough to become a county seat and form a new county. New Albany leaders sent Nathaniel Scribner and John K. Graham to the capital at Corydon to petition the General Assembly. Legislation was passed on January 2, 1819 by the General Assembly, and the county was established on February 1. The origin of the county's name is debated. According to the State Library, it was named for John Floyd, a leading Jefferson County, Kentucky pioneer and uncle of Davis Floyd. John Floyd was killed in 1783 when his party was attacked by Indians in Bullitt County, Kentucky. However, some maintain the county was actually named for Davis Floyd, who was convicted of aiding Aaron Burr in the treason of 1809. Davis Floyd had also been a leading local political figure and was the county's first circuit court judge.

In 1814, New Albany was platted and was established as the county seat on March 4, 1819. There was an attempt in 1823 to move the county seat, but the motion failed. New Albany would be the largest city in the state for much of the early 19th century, eventually being overtaken by Indianapolis during the Civil War.

Between 1800 and 1860, Floyd County experienced a huge boom in population (doubling many times over). A survey in the 1850s found that over half of Indiana's population that made more than $100,000 per year lived in Floyd County, establishing it as having the richest population in the state.

The Duncan Tunnel, the longest tunnel in Indiana, was built in Floyd County in 1881 between New Albany and Edwardsville. Because no route over the Floyds Knobs was suitable for a railroad line, civil engineers decided to tunnel through them. The project was originally started by the Air Line but was completed by Southern Railway. It took five years to bore at a cost of $1 million. The Tunnel is 4,311 feet (1,314 m) long.

Floyd County, during the 19th century, attracted immigrants of Irish, German, French and African American origins. The French settlers located mostly in Floyds Knobs, Indiana. The Irish began arriving in 1817 and settled in large numbers between 1830 and 1850. German immigrants settled mostly in New Albany. By 1850, about one in six county residents had been born in other countries.

All content from Kiddle encyclopedia articles (including the article images and facts) can be freely used under Attribution-ShareAlike license, unless stated otherwise. Cite this article:
Floyd County, Indiana Facts for Kids. Kiddle Encyclopedia.