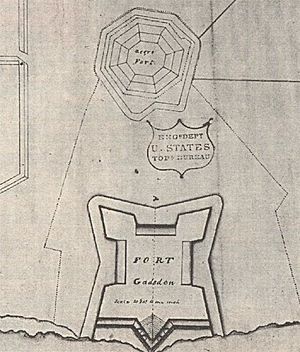 Map of Fort Gadsden, also showing the location of the original "Negro Fort". 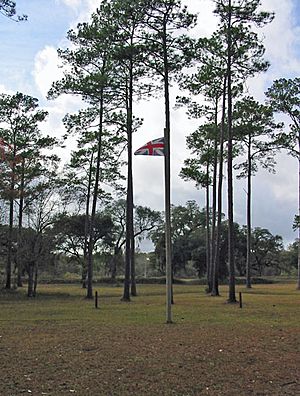 A Union Jack on the site of the original British fort. 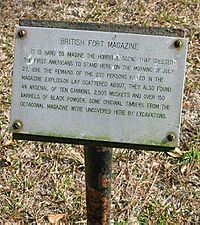 A Commemorative plaque marks the location of the fort's powder magazine.

Fort Gadsden is located in Franklin County, Florida, on the Apalachicola River. The site contains the ruins of two forts, and has been known by several other names at various times, including Prospect Bluff Fort, Nicholls Fort, Blount's Fort, British Post, Negro Fort, African Fort, and Fort Apalachicola.

Listed in the National Register of Historic Places, the Fort Gadsden Historic Site is located in Apalachicola National Forest and is managed by the U.S. Forest Service. It was named a National Historic Landmark in 1972.

During the War of 1812, the British hoped to recruit the Seminole as allies in their war against the United States. In August 1814, a force of over 100 officers and men led by a lieutenant colonel of the Royal Marines, Edward Nicolls, was sent into the Apalachicola River region in Spanish Florida, where they began to aid and train local Native Americans. Although Nicolls claimed he rallied large numbers of Native Americans, his efforts bore little fruit in terms of fighting, and the completion of the war ended his mission a few months after his arrival.

In late November 1814, United States Major Uriah Blue, commanding a 1000-man force of Mississippi militia, Chickasaw and Choctaw warriors, left Fort Montgomery (east of Mobile and west of Pensacola), to seek out and to destroy the Red Stick Creeks. Present among the force was Creek War veteran Davy Crockett. Being unfamiliar with the territory, and being short of provisions, Major Blue's force did not find the fort, and returned to Fort Montgomery on January 9, 1815.

Before Nicolls left East Florida, he built a fort at Prospect Bluff, 15 miles above the mouth of the Apalachicola River and sixty miles below U.S. territory, which he equipped with cannon, guns, and ammunition. The fort, originally known as the British Post, served as a base for British troops and for recruitment of ex-slaves into the new Corps of Colonial Marines, and as a rallying point to encourage the local Seminole to attack the United States. When the British evacuated Florida in the spring of 1815, they left the well-constructed and fully armed fort on (the east bank of) the Apalachicola River in the hands of their allies, about 400 fugitive slaves, including members of the disbanded Corps of Colonial Marines, and a sizable number of native Indians. News of the "Negro Fort" (as it came to be called) attracted as many as 800 black fugitives who settled in the surrounding area.

In September 1815, US Indian Agent Benjamin Hawkins sent a group of 200 men to attack the fort at Prospect Bluff. The attack failed, thereby lulling the inhabitants of into a false sense of security. Under the command of a black man named Garson and a Choctaw chief (whose name is unknown), the inhabitants of Negro Fort launched raids across the Georgia border. The fort, located as it was near the U.S. border, was seen as a threat to Southern slavery. The U.S. considered it "a center of hostility and above all a threat to the security of their slaves."

The Savannah Journal wrote of it:

It was not to be expected, that an establishment so pernicious to the Southern States, holding out to a part of their population temptations to insubordination, would have been suffered to exist after the close of the war. In the course of last winter, several slaves from this neighborhood fled to that fort; others have lately gone from Tennessee and the Mississippi Territory. How long shall this evil, requiring immediate remedy, be permitted to exist?

In early 1816 the U.S. built Fort Scott on the west bank of the Flint River in the southern part of Georgia to guard the United States border between the state and Spanish Florida. Supplying the fort, however, was a problem; to take materials overland required traveling through unsettled wilderness. Major General Andrew Jackson, the military commander of the southern district, preferred supplying Fort Scott by boat using the Apalachicola River in Spanish territory. This was both easier and provided a likely casus belli for destroying the Negro Fort. As expected, when a US naval force attempted the passage on July 17, 1816, it was fired on by the garrison at the Negro Fort, and four U. S. soldiers were killed.

Ten days later, Andrew Jackson ordered Brigadier General Edmund P. Gaines at Fort Scott to destroy the Negro Fort. The American expedition included Creek Indians from Coweta, who were induced to join by the promise that they would get what they could salvage from the fort if they helped in its capture. On July 27, 1816, following a series of skirmishes, the American forces and their Creek allies launched an all-out attack under the command of Lieutenant Colonel Duncan Clinch, with support from a naval convoy commanded by Sailing Master Jarius Loomis.

According to Historian William Cooper Nell, the Freedmen refused to surrender and submit themselves back into slavery, and cries of "Give me liberty, or give me death!" were repeated several times throughout the day. The two sides exchanged cannon fire, but the shots of the inexperienced black gunners failed to hit their targets. A "hot shot" (a cannonball heated to a red glow) from the American forces entered the opening to the fort's powder magazine, igniting an explosion that was heard more than 100 miles (160 km) away in Pensacola, and destroyed the fort, killing all but 30 of 300 occupants. Garson, the Freedman commander, and the Choctaw chief, among the few who survived, were handed over to the Creeks, who shot Garson. African-American survivors were returned to slavery.

The Creek salvaged 2,500 muskets, 50 carbines, 400 pistols, and 500 swords from the ruins of the fort, increasing their power in the region. The Seminole, who had fought alongside the blacks, were conversely weakened by the loss of their allies. The Creek participation in the attack increased tension between the two tribes. Seminole anger at the Americans for the fort's destruction contributed to the breakout of the First Seminole War a year later.

Spain protested the violation of its soil, but according to historian John K. Mahon, it "lacked the power to do more."

In 1818 General Jackson directed Lieutenant James Gadsden to rebuild the fort, which he did on a nearby site. Jackson was so pleased with the result that he named the location Fort Gadsden.

During the American Civil War, Confederate troops occupied the fort until July 1863, when an outbreak of malaria forced its abandonment.

All content from Kiddle encyclopedia articles (including the article images and facts) can be freely used under Attribution-ShareAlike license, unless stated otherwise. Cite this article:
Fort Gadsden Facts for Kids. Kiddle Encyclopedia.