Gardens by the Bay facts for kids 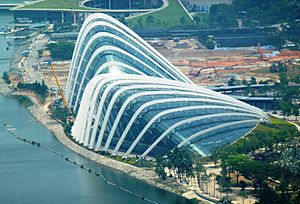 Gardens by the Bay is an horticultural theme park south of Marina Bay in Singapore. Opened in June 2012, Gardens by the Bay is made up of three waterfront gardens: Bay South (54 hectares), Bay East (32 hectares) and Bay Central (15 hectares). It is a part of Singapore's plan to become a "City in a Garden”. Singapore wants to be a leader in Asia in environmental sustainability and landscape architecture.

In January 2006, Gardens by the Bay began an international master plan design competition to get world-class ideas for the Gardens. The competition attracted more than 70 entries sent by 170 firms, from over 24 countries, including 35 from Singapore. Grant Associates and Gustafson Porter, both from UK, were awarded the master plan design for the Bay South and East Gardens in September 2006.

Gardens by the Bay, a 101-hectare horticultural attraction, contains 250 thousand rare plants in domed conservatories. There are two distinctively different conservatories: the Flower Dome and the Cloud Forest, designed by Wilkinson Eyre Architects. Both are planned for sustainable cycles in energy and water throughout Bay South Garden. The conservatories are the biggest climate-controlled greenhouses in the world and aim at creating cool growing environments in a pair of glasshouses.

All content from Kiddle encyclopedia articles (including the article images and facts) can be freely used under Attribution-ShareAlike license, unless stated otherwise. Cite this article:
Gardens by the Bay Facts for Kids. Kiddle Encyclopedia.