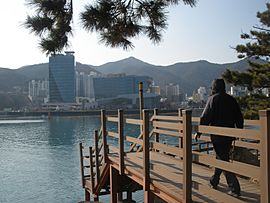 Geoje is a city in South Gyeongsang province, just off the coast of the port city of Busan, South Korea. Daewoo Shipbuilding & Marine Engineering (former Daewoo Shipyard) in Okpo and Samsung Heavy Industries (SHI) in Gohyeon are both located on Geoje Island. The city also offers a wide range of tourist sights. The city is made up of a number of islands, of which by far the largest is Geoje Island. There are multiple dong in the city: Jangpyeongdong, Okpo-dong and Gohyeon.

All content from Kiddle encyclopedia articles (including the article images and facts) can be freely used under Attribution-ShareAlike license, unless stated otherwise. Cite this article:
Geoje Facts for Kids. Kiddle Encyclopedia.