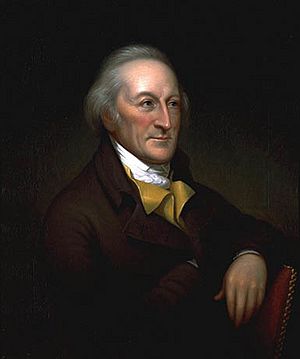 He was one of the first Patriots to advocate complete independence from Britain in the United States of America.

As a Pennsylvania representative, Clymer was, along with only five others, a signer of both the Declaration of Independence and the U.S. Constitution.

George Clymer attended the Continental Congress and served in political office until the end of his life.

All content from Kiddle encyclopedia articles (including the article images and facts) can be freely used under Attribution-ShareAlike license, unless stated otherwise. Cite this article:
George Clymer Facts for Kids. Kiddle Encyclopedia.