Kids Encyclopedia Facts
This page is about the district in Glasgow, Scotland. For the city in South Africa, see Germiston. 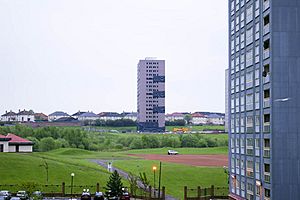 Germiston is an area in the city of Glasgow, Scotland. It is situated north of the River Clyde.

The area forms part of the suburb of Springburn for political purposes, but is more commonly referred to as part of the Royston corridor,its location midway between Blackhill & Garngad earns it a position as the 'wee sister' of both of those larger neighbourhoods. The recent construction of new private housing injected some much needed life into what was a decaying area, combined with new developments on the old railway yards on Royston road, have done much to breathe new life into the area.

During Glasgow's growth during the Industrial Revolution, it was a vital part of the city's locomotive manufacturing industry, as well as sitting upon a major railway junction. Germiston Works, one of such locomotive factories was sold onto the Cape Asbestos Company, who used it to manufacture fireproof insulation materials. The plant still exists to this day, under the ownership of Promat, and now uses the safer Calcium Silicate for such material.

A narrow gauge underground railway used to exist at Germiston, however the majority of the path it once took as now been "filled-in" to develop the land for house building. The tunnel, which runs from Darnick Street Tunnel to Royston Road Forge Street has long since fallen into disuse. The Tunnel, known locally as the "Blind Tunnel", access is not the experience it one was, thanks to new lighting. It is often confused with an adjacent tunnel that has now been blocked completely by metal fencing to ensure no unauthorised access to the local Provan gas Works. The underground railway from Germiston was used to transport coke to nearby Provan Gas Works for the manufacture of gas.

All content from Kiddle encyclopedia articles (including the article images and facts) can be freely used under Attribution-ShareAlike license, unless stated otherwise. Cite this article:
Germiston, Glasgow Facts for Kids. Kiddle Encyclopedia.