Golconda is a census-designated place in southeastern Humboldt County, Nevada, United States. As of the 2010 census it had a population of 214. It is located along Interstate 80 on the Humboldt River in the northwestern part of the state. Golconda has a post office, which has been in operation since 1869. 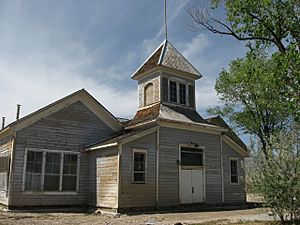 Golconda School is listed on the National Register of Historic Places

Golconda was established when discovery of copper, silver, gold, and lead brought entrepreneurs who opened mines and mills in the district. The town was a diverse society including both native-born European Americans as well as other groups including individuals of French, Portuguese, Paiute, and Chinese descent who all lived and worked in the small community. During 1898-1910, the town had a train depot, several hotels, a school, businesses and newspapers. Its population peaked at about six hundred in 1907-08. Although boosters predicted growth for Golconda, after 1910 the mines played out, leaving the region as an area of ranches and farms. Most of the town's buildings from its mining heyday are gone, and Golconda today is a minor stop on Interstate 80.

The community lies at an elevation of approximately 4,350 feet (1,330 m) 12 mi (19 km) east of Winnemucca across the Sonoma Range and 5.7 mi (9.2 km) west of Golconda Summit, a nearby mountain pass on Edna Mountain. The Osgood Mountains lie across the Humboldt River to the north. A post office is located in the community.

According to the United States Census Bureau, the Golconda CDP has an area of 9.0 square miles (23.4 km2), all land.

All content from Kiddle encyclopedia articles (including the article images and facts) can be freely used under Attribution-ShareAlike license, unless stated otherwise. Cite this article:
Golconda, Nevada Facts for Kids. Kiddle Encyclopedia.